Pastor Eleyitayo Arannilewa, whose mother's throat was slit explains that she was probably killed by ritualists. 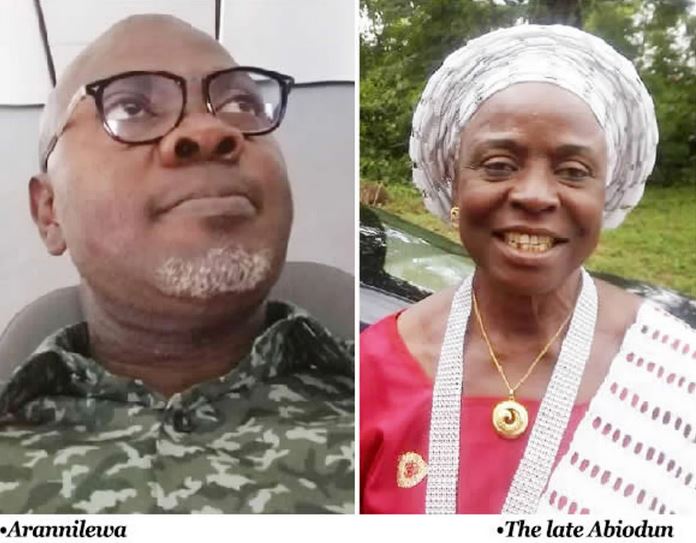 Mrs Abiodun Arannilewa, 78, was found dead in a stream close to her house with her throat slit. Her eldest son, Pastor Eleyitayo Arannilewa, tells ABIODUN NEJO that she was probably killed by ritualists

How was your mother killed?

On May 29, 2020, I was at my place in Lagos when I received a call that they were looking for Mama at Ikere-Ekiti. They said Mama was not at home and that they could not reach her on the phone. The matter was promptly reported to the police and they came. It was at that point that she was found dead, gruesomely murdered inside a bush near her house.

How was her body found?

The police and our uncles found the body. They were everywhere looking for her.

Why do you think she was killed?

I cannot even imagine it. Maybe she was killed by a guy looking to perform a ritual to make quick money – there are ‘Yahoo Plus guys’ (ritualists) all over Ekiti. This is a wake-up call to the state government and our leaders. They appear to be calm and okay with it. You see hotels all over the town, who do you expect to use the hotels? Most of the hotels in town don’t give out receipts because ‘Yahoo guys’ (Internet fraudsters) lodge there permanently because that is the only way they won’t be traced. At 17, some of them already have built three, four houses. I am above 50 years old and have been struggling. At 16, I was hawking pepper for my mum. And when I was a prefect in secondary school, they were calling me Prefect ‘Alatarodo’ (Pepper).

How would you describe your mother?

She had five children and I am the first child. I have a brother and three sisters. She sold pepper and tomatoes while we were growing up. But when she aged, she decided to get a shop where she sold yams close to where she stayed – a few junctions away from here. She was a good Christian and a devout Catholic.

What about your father?

My father died on October 1, 2011. She had been in the house about six years before our father’s death.

Before she died, did she have things she looked forward to achieving in the future?

Every mother will be glad to feel alive. She did not want to leave the environment where she lived; we got a place not far away from here that we wanted to build a house for her. Even if I said she should come to live with us in Lagos, she would not spend more than two weeks before she would return to Ekiti. If any of my siblings said the same thing, Mama would not spend more than two weeks before craving to return home. It was like being at Ikere here kept her younger. At Ikere, she would trek to some places she had to go and greet people on her way; those were things that kept her happy. Her plan was to get herself fulfilled and see her children successful in life. That was why she suffered and assisted my dad to make sure that everything worked well. All her children are graduates.

How was her relationship with her children?

It was wonderful. There was no week mama would not call us three or four times. Whenever she called, she would pray for us. Sometimes, I would be in the office with people I do business with and Mama would call and start praying on the phone, not knowing who I was with.

How was her relationship with her neighbours and tenants?

It was also wonderful, except for some guys that she rented a place to and they were unknown to us. When they came, they introduced themselves as students of the college of education. When she cooked, she would share to them. Recently, my uncle called to tell me that one of the tenants was harassing my mum and that I should come from Lagos to intervene. I called one of my younger brothers who said I should not bother, that he would send one of our cousins. My cousin and uncle went to the place. The guy had to move out of the house. I later learnt the guy vowed to punish Mama, but we never imagined it could be like this.

There is no way anybody who have not stayed in that house would know about the place where they killed and dumped Mama’s body, which was behind here. I am Mama’s son; I have never been to that spot where they killed her. People do not pass there as there is no thoroughfare there. Nobody could go there if they did not know the place or were not a tenant here. There were four tenants in the house. Three of them were arrested while one of them was not around. One left three days before she was killed but he has not been arrested; he was the one who harassed Mama. One of my uncles hinted the police on where the guy lives, but up till now, he has not been arrested. It is going to be a blow for us if we lose our mum and also lose justice.

Did she tell you she had any problem with her customers?

No. Mama would never have any problem with any customer. This was a person that we would send money to – as we paid her salary monthly, but Mama would spend the money meant for her upkeep on school fees of children in the neighbourhood. That was the kind of mother she was.

How far have the police gone with their investigation?

That is the major issue we have. I do not have any report from the police yet. Police would tell you they have not arrested any other person except the few tenants arrested and I learnt they have released them. How can you release somebody within 48 hours of arrest for murder case? It is funny. I was the one who calmed down the women here when they said they wanted to protest against the handling of the case by the police when they learnt that the suspects had been released.

What do you think about the matter?

I want this matter to be brought to the fore. We are tired of the gruesome killings happening all over the place! There are young guys who are 16, 17 years old killing old people for rituals with the promise that they would make quick money. They came to our place, slaughtered our mother and nobody is doing anything about it. The authorities should not wait till people take the law into their own hands. I want the police to make sure the culprits are brought to justice. We can hardly wait because that is the only way my mum will surely rest well. If we lose our mum and lose justice, then it is not going to augur well and we are not going to rest too. My mother needs justice; her blood is crying. What every member of the family wants is justice, justice, and justice.

What will you miss about your mum?

I miss everything about my mum. A day before she was killed, my mum called me and asked when I would come to see her. She reminded me of my promise to come home before May ending, I said I wanted to come but the lockdown was the problem. I said I had not seen her for over two months and I needed to come home. I didn’t even know it would be like this. Nobody can be like my mum. Yes, there are good uncles and aunties, but there will be none like my mum. The only person that can tell you the truth is your mum. My mum would prepare pounded yam and ofada rice for me, and ask which of the two I wanted to eat.

When was the last time you saw your mum?

It was in February. The first thing I missed when I came home after her death was not hearing her saying in Ekiti dialect, ‘Where are you?’ She would ask where I was so my food would be prepared. Nobody did that; everybody was just saying, ‘Sorry’. Nobody would care for me like my mother. My father fell ill and died; my mum was gruesomely killed. During this COVID-19 lockdown, I told my mum to take her drugs religiously as she had high blood pressure. Jokingly, I told her that anybody that died during the period would be buried without any fanfare, and she said she would not die. She was very healthy. At 78, she looked young. You would not believe she was almost 80.

What does her death mean to you and the family?

It is a very great loss. I can never recover from it. My mum is irreplaceable. She was a gift to us. She was very supportive of her husband when we were being trained. She was a total woman.

Daddy Freeze, Hushpuppi And The Future Of Nigeria
Recent Stories