How We Terrorized Taraba, Abducted Many For Ransoms - Notorious Kidnap Suspects Confess 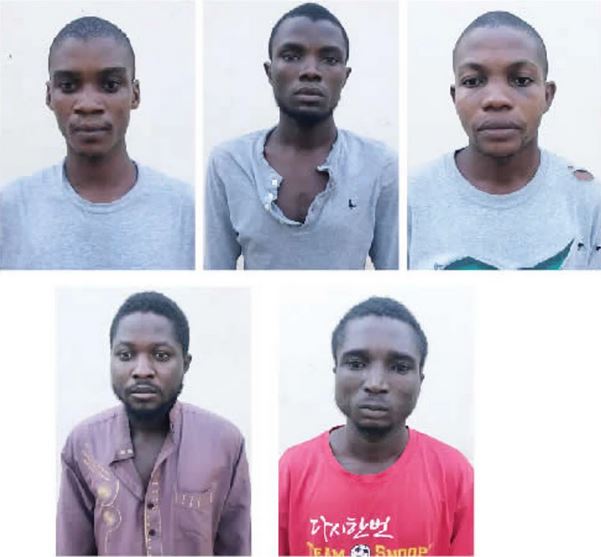 Five suspects arrested for robbery, kidnapping and murder in Taraba State have owned up to the various roles they played in the criminal acts, PUNCH Metro reports.

They were arrested recently in different locations by operatives of the Inspector-General of Police Intelligence Response Team.

City Round learnt that the suspects were members of various gangs that sprung up in the wake of clashes between Jukun and Tiv people in the state.

It was gathered the rising spate of kidnappings, armed robbery and murder perpetrated by the criminals made concerned locals to petition the Inspector-General of Police, Mohammed Adamu.

The IG was said to have deployed the IRT team led by DCP Abba Kyari to track down the gangsters.

It was learnt that the most notorious gang terrorising the state was headed by a fleeing 27-year-old man, identified as Joe Agrema, who is on police wanted list. Joe is said to be Felix’s elder brother.

He reportedly had about 10 AK-47 rifles in his armoury and led large members who carried out kidnapping, armed robbery and murder within Southern Taraba.

A police source stated that Joe, a Tiv, is highly feared by the Jukun people and his tribesmen. He reportedly threatened to kill anyone who condemned his criminal activities.

“Few weeks into the deployment of the detectives, four of Joe’s men, including his younger brother and two of his informants who monitored his victims, were arrested. They all confessed to the crime. Ihyar said Joe plotted to kill him because he left his gang to form his own,” a source told City Round.

Speaking during the week on his role as an informant to Joe, Yakubu explained that the kingpin paid him N10,000 for any assignment he carried out.

The 20-year-old suspect said the gang once killed a wrong target during an operation, an occurrence that angered Joe.

He said Joe asked him to locate the victim’s family and informed them that his gang was responsible for the killing.

He said, “I am Fulani by tribe, but I was born in Gassol Local Government Area (Taraba State). I am also a tailor and I knew Joe through one of my friends. I am one of his informants and he sent me to monitor victims for him. One day, he sent his boys to kill someone at a general hospital. He instructed me to go to the hospital and confirm the identity of the man who was killed. When I got to the hospital, I was told that the person who was killed had been taken to a police station.

“I went there and confirmed that the person killed at the hospital wasn’t the main target. He was killed because when Joe’s men arrived there, they ordered everyone to lie on the floor and face the ground but when they were leaving, the man raised his head to see the faces of the people who came for the operation. He was shot and died at the spot.

“I relayed the information to Joe and he asked me to trace the victim’s family and when I got to the man’s house, I called Joe and he requested to speak to any of the man’s relative. I found one and he told the person on the phone that his boys wrongly killed the man but he was going to foot the bill for his burial. Joe also sent me to monitor a man known as Menassara, whom he wanted to kill. I had yet to complete the assignment before I was arrested. He gave me N10,000, whenever he sent me on an assignment.”

Yakubu stated that Joe also killed three of his (Yakubu’s) friends for supporting Junkun people during the crisis and speaking ill of him.

Ihyar, also a native of Gassol Local Government Area, explained that he fought alongside Joe last year in the communal clashes, adding that they later morphed into a kidnap gang.

He said, “I joined Joe during the Jukun and Tiv crisis which broke out last year. Joe is from the Dan Anancha area of our local government and we fought together during the crisis. Afterwards, Joe formed a kidnap gang with the guns he got during the crisis.

“He has a camp inside the forest and he comes out with his men to kidnap or kill any one he has in mind. He had issues with people who criticise him for his criminal acts. He tried to kill one of them at Dan-Anancha General Hospital, where he was hospitalised. The man was lucky. He got information that Joe was coming and he escaped. Unfortunately, a wrong person was killed.

“I later stopped working with him and I formed my own gang using one of the revolver pistols my community bought for me during the crisis to rob people on the highway. Joe learnt about it and he started plotting how to kill me. Some of his boys who were loyal to me told me about the plan. I was trying to stay away from him when police arrested me.”

Joe’s younger brother, Felix, said he joined the gang in March 2020 and took part in an operation.

He said, ‘‘I joined him in kidnapping some Tiv delegates who were on their way home after visiting the governor in Jalingo. We blocked the expressway using army uniform and we abducted the delegates. The sum of N7m was paid for their release. I bought a car with my own share of the ransom.”