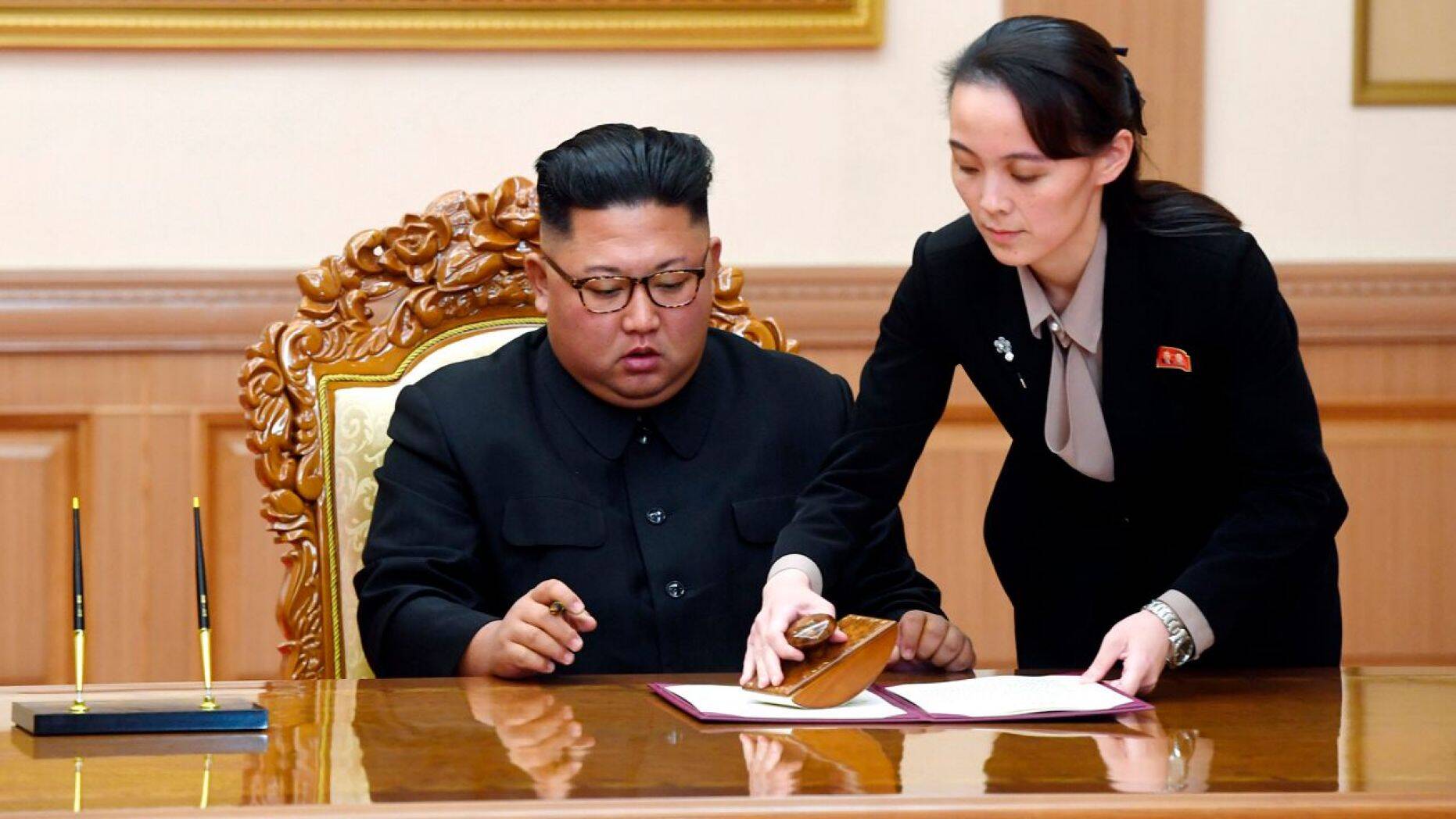 Kim Jong Un and his sister, Kim Yo Jong
The sister of North Korea leader Kim Jong Un bashed South Korea and has threatened military action after a recent decline in relations.
Kim Yo Jong took aim at the inter-Korean liaison office in the border town of Kaesong, promising a “tragic scene” after she accused Seoul of not doing enough to stop an anti-Pyongyang leaflet campaign, calling the liaison office “useless.” Activists regularly float balloons into North Korea carrying leaflets that criticize the leadership, a move that generally garners a furious response.
“By exercising my power authorized by the supreme leader, our party and the state, I gave an instruction to the arms of the department in charge of the affairs with [the] enemy to decisively carry out the next action,” she said in a statement carried by North Korean's state-run Korean Central News Agency (KCNA).
"Before long, a tragic scene of the useless North-South joint liaison office completely collapsed would be seen.”
Kim Yo Jong took a harsh stance and called defectors who helped with the leaflet campaign “human scum” and “mongrel dogs.”
In response to North Korea’s anger over the leaflets, South Korea’s government promised to press charges against defector groups that have been carrying out border protests. South Korea also said it would push new laws to ban activists from flying the leaflets across the border, though some worry that President Moon Jae-in is more concerned about a dream of reunification than the safety of his country.
Kim Yo Jong now serves as the Workers’ Party’s Central Committee first vice department director, an elevated position that grants her greater power over the party and, by extension, the country. When her brother Kim Jong Un disappeared from the public eye in April, rumors circulated that Kim Yo Jong would potentially replace him as leader of the country.
While her brother has made public appearances since then, Kim Yo Jong has taken a more prominent place in public dealings. She recently criticized South Korea, declaring the North would cut off all government and military communication and threatened to abandon the peace agreement reached by their leaders in 2018.
The drop in relations between North and South Korea comes at a time when denuclearization talks between Kim Jong Un and President Trump have stalled.
North Korea marked its two-year anniversary of the first summit between Kim Jong Un and President Trump by vowing to build up its armed forces to counter what it perceives as threats from the United States.
Foreign Minister Ri Son Gwon also told Seoul to drop “nonsensical” talk about denuclearization.
“The question is whether there will be a need to keep holding hands shaken in Singapore, as we see that there is nothing of factual improvement to be made in the DPRK-U.S. [Democratic People's Republic of Korea-U.S.] relations simply by maintaining personal relations between our supreme leadership and the U.S. president,” Ri was quoted as saying.
“Never again will we provide the U.S. chief executive with another package to be used for [political] achievements without receiving any returns,” he added.
“Nothing is more hypocritical than an empty promise.”
Reported by FoxNews
Top Stories