A woman took to Facebook to reveal how she almost lost her virginity to an unserious man in 2015. 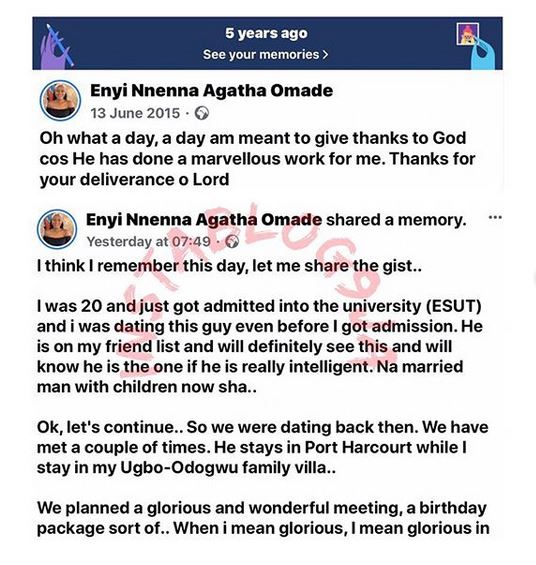 A Nigerian lady has narrated how she almost lost her virginity to a man who dumped her to marry his childhood friend.

According to Enyi Nnenna Agatha Omade, this happened when she was 20-years-old and had just gotten admitted into Enugu State University of Science and Technology (ESUT).

The Facebook user who disclosed that the man travelled from Port Harcourt to Enugu for their first night together, said he never protested after she told him they can't go on with the plan following a Christian meeting they attended together.

She however said the man called a few weeks later to tell her that he was getting married to a childhood friend.

I think I remember this day, let me share the gist..

"I was 20 and just got admitted into the university (ESUT) and i was dating this guy even before I got admission. He is on my friend list and will definitely see this and will know he is the one if he is really intelligent. Na married man with children now sha..

Ok, let's continue.. So we were dating back then. We have met a couple of times. He stays in Port Harcourt while I stay in my Ugbo-Odogwu family villa..

We planned a glorious and wonderful meeting, a birthday package sort of.. When i mean glorious, I mean glorious in sin meeting (I planned to loose my v***y to him). We made our plans. It was the first time I ever agreed to follow a man to an hotel. Back then who born you to invite me to an hotel, I will abuse you till thy kingdom come just for ordinary invite..

I wouldn't know which best describes the scenario that played out, if it was a fortunate abi unfortunate incident.. By then I had joined Chari in school (just within 3 days interval of our discussions abi evil plans).. God bless Light Bearers Community ESUT.

I was a "new convert" so to say and was undergoing the compulsory life in the spirit seminar every Charismatic must pass through.. I spoke to our foundation class coordinator then Mummy Nnenna Osita Ezugwu (God bless you for me) about the plans I had with the said guy and that I don't know how to call off what I had already planned.. She said I shouldn't worry, that I should invite the guy over since we will be having "deliverance" aspect of the Life in the Spirit seminar.. That if it is the wish of God for uncle to marry me, after the program, uncle will not hesitate to do so without robbing me of my V***y since uncle said he wanted to marry me..

I didn't tell guy man that plans have changed. Uncle travelled all the way from Port Harcourt (according to him sha). I asked him to come into the school and pick me up (unto say I be beans na). Uncle rode on Okada straight down to school with his bag of clothes. When he arrived, I told him we were still praying and he should join us, that after the prayer we will proceed to the hotel.. Uncle agreed and joined in the prayers inside the school auditorium.. Trust Mummy Regia's ministrations na..

After the prayers, I told uncle that as he can see that both of us are spirit filled and can't indulge in evil acts. Surprisingly uncle concurred, he agreed and started going back to Port Harcourt. He gave me two apples sha as a parting gift. You can imagine..

Uncle didn't call me again neither did i call him until few weeks later, I got a call from uncle.. Guess what? Uncle broke the good news to me, this was our conversation

Uncle: babe, I have made up my mind to get married
Me: (filled with excitement) when are you coming to see my parents.

He started giving excuses about my being in year one and how I can't combine marriage and school.. You can imagine, are you me? Is me you? You is me? How could he have concluded for me on managing school and marriage.. Lastly he now said "I have decided to get married to my childhood friend" blood of Jesus Christ!!!!

I was dumbfounded.. You needed to see me screaming that day.. Immediately he dropped that last sentence, I ended the call and started singing praises to God not minding I was in the public (Nomeks female hostel tap)..

After the whole incidence I started analyzing what had happened,
Had it been I allowed our plans pull through, uncle would have come back to tell me this trash he just vomited..

I later went to Thanksgiving on Sunday that same week to thank God for delivering me from onye uchu ogbugba..

I still talk to the guy sha but I already have a bad image of him stored up in my head.. He was a lion in sheep clothing.. A deceiver, he wanted to take advantage of a young and naïve year one student but God pass am..

Thanks to Mummy Nnenna, thanks to Light Bearers Community ESUT Agbani campus, I love you all.." 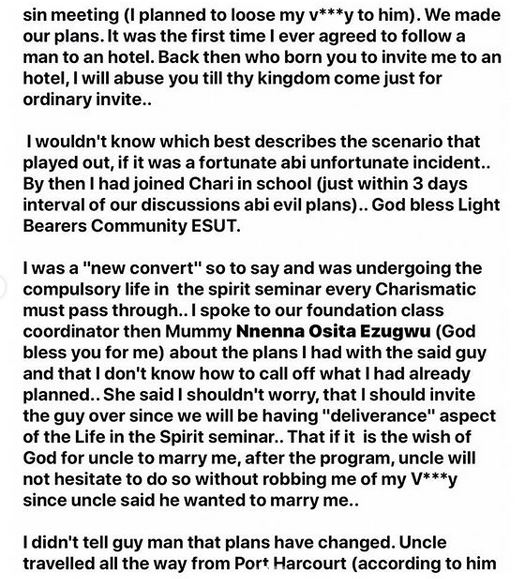 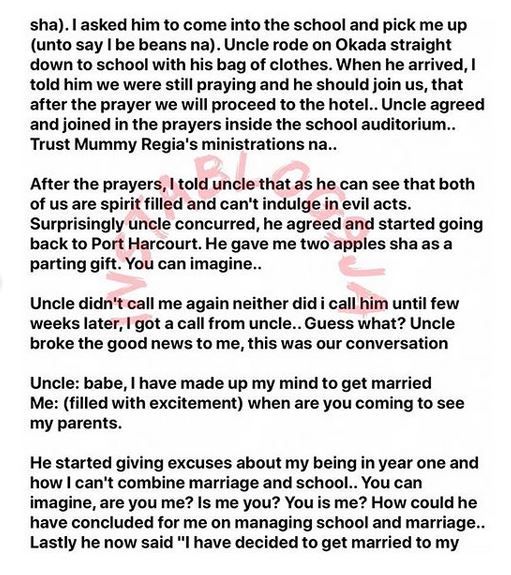 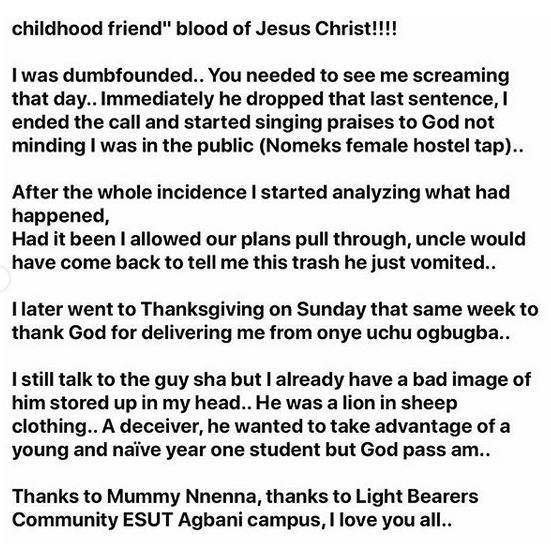