Twenty Indian soldiers have been killed during a clash with Chinese troops at a disputed border. 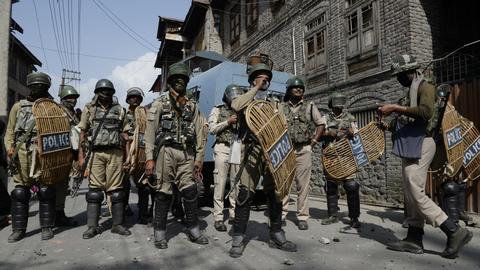 20 Indian soldiers died during clash with Chinese troops
At least 20 Indian soldiers have died after a "violent face-off" with Chinese troops along the countries' de facto border in the Himalayas late Monday, the Indian army has said.
The incident occurred during a "deescalation process" underway in the Galwan Valley in the disputed Aksai Chin-Ladakh area, where a large troop build-up has reportedly been taking place for weeks now on both sides of the border, before senior military commanders began talks earlier this month.
The Indian army had earlier said three soldiers had died, but added on Tuesday that a further 17 troops "who were critically injured in the line of duty at the standoff location and exposed to sub-zero temperatures in the high altitude terrain have succumbed to their injuries."
The deaths are the first military casualties along the two countries' disputed border for more than 40 years.
According to the earlier Indian army statement, there was loss of life "on both sides," but it did not specify any number of Chinese casualties.
Senior military officials from both sides are currently meeting to defuse the situation, the statement added.
"India and China have been discussing through military and diplomatic channels the de-escalation of the situation in the border area in Eastern Ladakh," said India's External Affairs Ministry spokesman Anurag Srivastava on Tuesday.
He said senior commanders had "agreed on a process for such de-escalation" during a "productive meeting" on Saturday, June 6, and ground commanders had met regarding the implementation.
"While it was our expectation that this would unfold smoothly, the Chinese side departed from the consensus to respect the Line of Actual Control (LAC) in the Galwan Valley," he said in the statement.
"Both sides suffered casualties that could have been avoided had the agreement at the higher level been scrupulously followed by the Chinese side," he added.
"Given its responsible approach to border management, India is very clear that all its activities are always within the Indian side of the LAC. We expect the same of the Chinese side.
We remain firmly convinced of the need for the maintenance of peace and tranquility in the border areas and the resolution of differences through dialogue. At the same time, we are also strongly committed to ensuring India's sovereignty and territorial integrity."
Indian Defense Minister Rajnath Singh met with the External Affairs Minister, the Chief of Defense Staff, and the chiefs of the Army, Navy and Air Force and to review the "operational situation in Eastern Ladakh" earlier on Tuesday, the army said.
At a regular news conference Tuesday, Chinese Foreign Ministry spokesman Zhao Lijian said that on Monday, "Indian troops seriously violated our consensus and twice crossed the border line for illegal activities and provoked and attacked Chinese personnel which lead to serious physical conflict between the two sides."
"China has lodged strong protest and representation with the India side, and we once again we solemnly ask the India side to follow our consensus and strictly regulate its front line troops and do not cross the line and do not stir up troubles or take unilateral moves that may complicate matters," Zhao added.
"We both agreed to resolve this issue through dialogue and consolation and make efforts for easing the situation and upholding peace and tranquility in the border area." Zhao did not comment on whether there had been any Chinese casualties.
China's People's Liberation Army (PLA) released a statement Tuesday night calling on the Indian army to immediately stop what it described as "provocative actions" and to "resolve the issue through the correct track of dialogue and talks."
"The sovereignty of the Galwan Valley region has always belonged to China," Zhang Shuili, the spokesman of the Western Theater said in a statement on China's Ministry of Defense website. "Indian troops violated its commitment, crossed the borderline for illegal activities and deliberately launched provocative attacks."
Zhang added that the "serious physical conflict between the two sides" had "resulted in casualties."
Source: CNN
Top Stories