A chieftain of the ruling All Progressives Congress has hailed the decision of the Appeal Court to remove party chairman, Adams Oshiomhole. 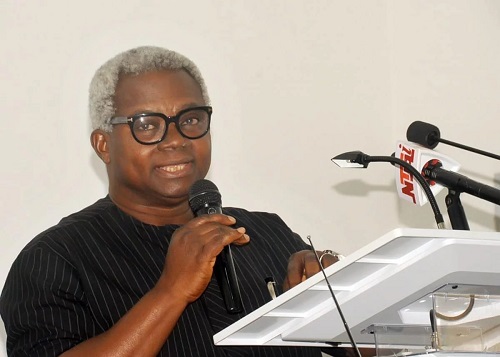 Osita Okechukwu
The Director-General of Voice of Nigeria, Mr. Osita Okechukwu, has praised Appeal Court verdict upholding the suspension of Comrade Adams Oshiomhole as the National Chairman of the All Progressives Congress, APC.
Recall that a three-man panel of the Court of Appeal on Tuesday upheld the earlier judgement delivered against Oshiomhole by a High Court.
Reacting, Okechukwu, who is a chieftain of the APC, said the judgement was in order.
He noted that by the verdict, “a Daniel has come to judgement.”
Hailing the move in a statement made available to newsmen, he said: “It is good riddance to bad rubbish. He was playing God. One is vindicated, as I had maintained that Comrade Adams was no more a valid chairman of our great party.
“Out of narcissism, he glossed over his valid suspension by his ward executive and with culture of impunity failed to adhere to the provisions of APC Constitution.
“A man who lost his ward, LGA and State Exco has no reason to remain chairman. The good thing is that his suspension will afford a golden opportunity for the leadership of our party to overhaul and reposition our great party along the core progressive tenets, as we enshrined during merger in our constitution.”
“Let’s be frank, and do a careful review of Adams stewardship and take our party as a company in stock market. As MD of APC Plc and taking states controlled in 2019 as stocks, did Adams pass or fail? He failed woefully,” Okechukwu declared.
Top Stories