Photos Of Nigerian Fraudster On FBI Most Wanted List For $6,000,000 Scam


The Federal Bureau of Investigation has declared a Nigerian man wanted for $6,000,000 fraud. 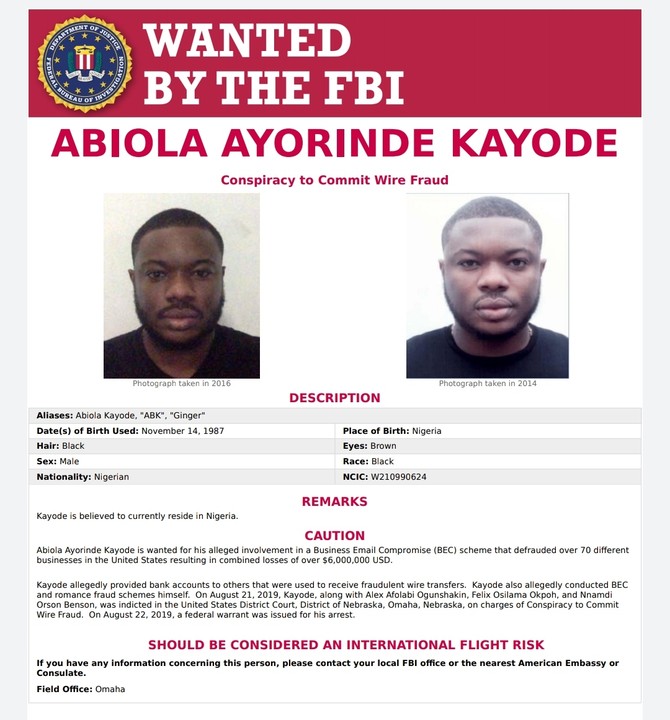 Abiola Ayorinde Kayode
A Nigerian  man, Abiola Ayorinde Kayode has been declared wanted by the FBI for a staggering $6,000,000 fraud.
Kayode is believed to currently reside in Nigeria.
See the report by FBI:
Abiola Ayorinde Kayode is wanted for his alleged involvement in a Business Email Compromise (BEC) scheme that defrauded over 70 different businesses in the United States resulting in combined losses of over $6,000,000 USD.
Kayode allegedly provided bank accounts to others that were used to receive fraudulent wire transfers. Kayode also allegedly conducted BEC and romance fraud schemes himself. On August 21, 2019, Kayode, along with Alex Afolabi Ogunshakin, Felix Osilama Okpoh, and Nnamdi Orson Benson, was indicted in the United States District Court, District of Nebraska, Omaha, Nebraska, on charges of Conspiracy to Commit Wire Fraud. On August 22, 2019, a federal warrant was issued for his arrest.
Top Stories