Juventus lost to Napoli in a shootout as the less favoured side claimed the Coppa Italia trophy. 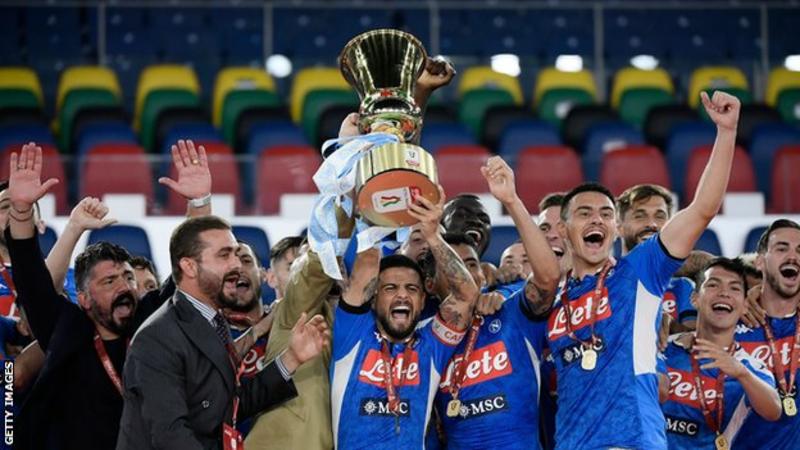 Napoli wins Coppa Italia
Napoli held their nerve to claim a first major trophy in six seasons by beating Juventus 4-2 in a penalty shootout in the Coppa Italia final.
Arkadiusz Milik scored the winning spot-kick after Paulo Dybala had seen his first for Juve saved, before team-mate Danilo blazed the second over.
This followed a hard-fought 0-0 over 90 minutes of few chances, played behind closed doors at the Stadio Olimpico.
It gives Napoli boss Gennaro Gattuso his first major trophy as a manager.
However, for his opposite number Maurizio Sarri it is another lost piece of potential silverware.
So far in his career - which included a transformational three-year spell at Napoli that saw them regularly challenge for the title - Sarri has just last season's Europa League to his name, from his one campaign with Chelsea.
And while his side currently top Serie A, they are far from assured of securing a ninth straight title and his first trophy on home soil, with their lead over second-placed Lazio just one point.
With the Coppa Italia semi-final second legs and final serving as a precursor to the return of the Italian top-flight, it was clear over 90 minutes that neither side is yet fully up to speed.
There was little to truly get excited about, although Napoli's Lorenzo Insigne did strike the post with a superb free-kick before Juve's legendary 42-year-old goalkeeper Gianluigi Buffon was forced into a smart save to deny Diego Demme from close range.
Arguably the best moment of normal time came with just seconds remaining, as Buffon was forced into another decent save to parry a Nikola Maksimovic header from a corner before Eljif Elmas somehow conspired to fire his follow-up against the post.
That took us to the shootout, which Juve handed to Napoli courtesy of two initial failures.
The first spot-kick from Dybala was at a perfect height for Alex Meret to push away, while the second was woefully dispatched over the bar by Danilo.
With Insigne, Matteo Politano and Maksimovic all scoring, it left Milik to seal the success, which he did with a coolly-taken effort into the bottom corner.
The Italian won the World Cup, Champions League and Serie A as a midfielder, but his transition to coaching has been largely underwhelming.
The closest he had previously come to silverware was in this competition in 2017 when he led AC Milan to the final but was on the receiving end of a 4-0 loss to Juve.
He replaced Carlo Ancelotti at Napoli in December with the squad in freefall and players at loggerheads with club management after refusing to take part in a week-long training camp.
But results in the league picked up in January and he has now guided the club to their first trophy since winning the Coppa Italia in 2014, setting up a potentially brighter future both for them and himself.
In keeping with this, they were also boosted earlier on Wednesday when all-time top scorer Dries Mertens signed a new contract until 2022.
They are way off the pace in Serie A - 24 points behind Juve in sixth place - but having come so close to a trophy in the last few seasons they will see this interrupted campaign as a success.
Culled from BBC Sports
Top Stories