So Sad! 19-year-old Girl Dies After Giving Birth To Triplets In Adamawa


A young mother has given up the ghost after giving birth to triplets in Adamawa. 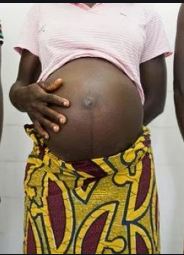 Teen died after giving birth to triplets
A 19-year-old, Lilian Benedict, has died after being delivered of a set of triplets in Yola South council of Adamawa State.
Mrs Josephine Geoffrey, Assistant Director, Nursing Services, Yola Specialist Hospital told News Agency of Nigeria (NAN) on Tuesday that the teenager died on Sunday.
Geoffrey said she died as a result of post-partum haemorhrage.
“She died as a result of bleeding after delivery and all the three babies are in good health condition,” she said.
“We therefore, advise parents whose young daughters are pregnant to, as a matter of urgency, attend early antenatal to avoid unnecessary complications during child birth, “ Geoffrey said.
She called on government, NGOs and public-spirited individuals to assist the babies with food and drugs to ensure their survival.
Top Stories