Some angry members of the ruling All Progressives Congress have stormed the party's headquarters demanding the sack of the NWC. 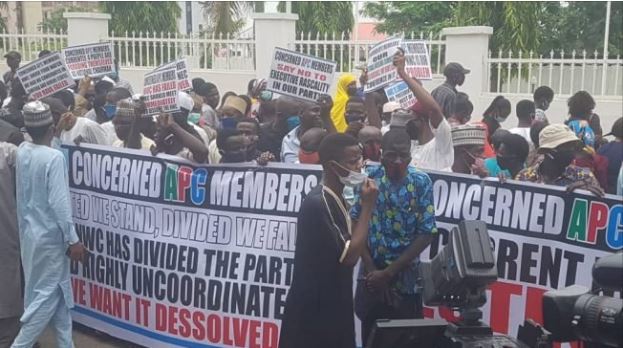 APC members protesting and demanding for sack of NWC
Aggrieved members of the All Progressives Congress (APC) have asked President Muhammadu Buhari and the national executive committee (NEC) to dissolve the national working committee (NWC) of the party.
The protesters on Monday, besieged the national secretariat of the party in Abuja on, holding banners and placards which read: “The current NWC has destroyed our party”, “NWC has divided our party”, “We want it dissolved”, among others.
The group under the aegis of Concerned APC Members said the current NWC has failed in its duties.
Top Stories