As his situation seems not to be improving, the APC has declared fasting and prayer session for ex-governor Ajimobi. 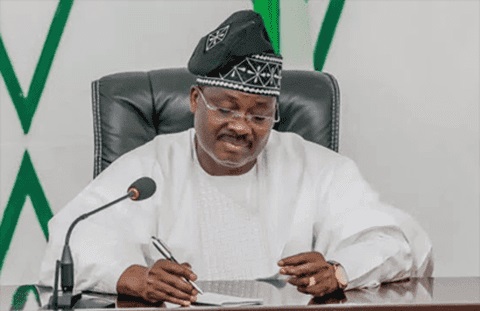 Abiola Ajimobi
The All Progressives Congress (APC) members under the aegis of the Oyo State Aspirants Forum, have declared a three-day fasting and prayer session for the former governor of the state, Senator Abiola Ajimobi, Punch has reported.
Recall that Ajimobi who is the acting National Chairman of the APC, is currently receiving treatment for Covid-19 at the First Cardiology Hospital in Lagos.
In a statement made available to journalists in Ibadan, on Monday, the APC forum urged all its members to participate in the three-day fasting and prayer session effective immediately..
The statement indicated that the former governor’s contribution to national development and the progress of the ruling party would be more needed at this time than ever.
This is coming following reports that Ajimobi is currently on life support machine after slipping into coma last week Thursday for the second time as a result of COVID-19 complications.
The 70-year-old ex-governor had been on life support machine since Friday, June 19, 2020, after he slipped into a deep coma and may not make any recovery going by the observations of medical experts around him.
A reliable source close to the ex-governor disclosed on Monday that Ajimobi has had a lung surgery since being hospitalised but made no progress while his kidneys have also failed.
It was reliably gathered that doctors treating Ajimobi, on Friday, informed his family that his situation had defied every medical intervention and that only a miracle can bring him back to life.
Top Stories