Popular Nigerian comedy group, Ikorodu Bois have been invited to the premiere of Nollywood movie, Extraction, after they recreated the movie trailer. 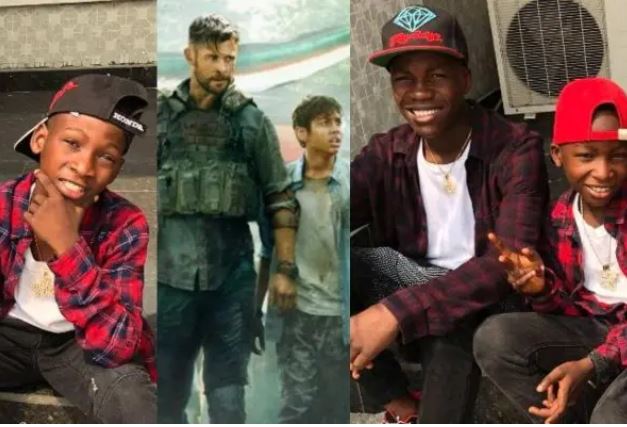 Ikorodu Bois, has been acknowledged for their recreation of the trailer for ‘Extraction’, an action-packed Netflix movie starring actor, Chris Hemsworth.

The ikorodu bois recreated the Trailer for the Netflix movie which debut back in April, then the russo brothers reacted to the clip by extended them a premiere invite to the sequel

Their video was good enough to get the attention of popular film’s directors, Joe and Anthony Russo, who acknowledged the kids and also invited them for the movie premiere of Extraction 2. Russo Brothers wrote on Twitter;

"This is awesome! We would love to have you guys at the #Extraction 2 premiere…DM us and we’ll get you there!"

The Ikorodu Bois consists of brothers Muiz Sanni, 15, Malik Sanni, 10, and their cousin, 13-year-old Fawas Aina acting out the movies and music videos while the Sanni’s older brother, 23-year-old Babatunde Sanni, works as editor and manager.

They’ve down some shot-for-shot reenactments of Bad Boys for Life, Money Heist, even a tribute to Kobe Bryant, and other pieces of entertainment.

The creative efforts of The Ikorodu Bois have not gone unnoticed in the past. ‘The Professor’ from Money Heist tweeted,

“What an amazing job!!! Congrats!! Thanks a lot for this. You all are the very best”.

The Ikorodu Bois have also gained over 500,000 followers on Instagram.

This is awesome! We would love to have you guys at the #Extraction 2 premiere...DM us and we’ll get you there! https://t.co/6eufmJMgT7