Special Adviser to the late governor on Communication and Strategy disclosed this during an interview with journalists at Oluyole Estate residence of the Ajimobis. 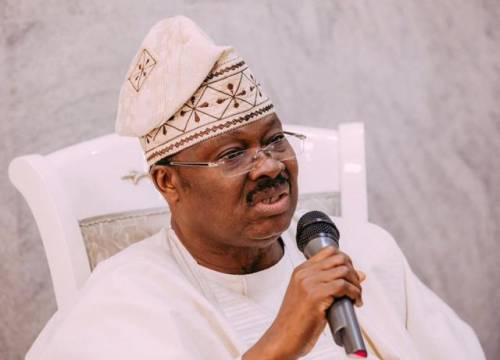 Former Acting National Chairman of the All Progressives Congress (APC) and the immediate past governor of Oyo State, Senator Abiola Ajimobi, will be given a private burial and it will solely be family affair in observance of the COVID-19 guidelines as released by the Nigeria Centre for Disease Control (NCDC), Sun News reports.

Special Adviser to the late governor on Communication and Strategy, Mr. Bolaji Tunji, who disclosed this during an interview with journalists at Oluyole Estate residence of the Ajimobis in Ibadan on Friday, said the funeral activities for the deceased would be announced by the family.

He ruled out earlier media reports that the remains of Ajimobi, who administered the pace setter state from 2011 to 2019, would be interred according to Islamic rites in Ibadan on Friday, June 26. Ajimobi died at a private hospital in Lagos on Thursday due to COVID-19 complications at the age of 70.

Tunji said: “We have all heard that he answered the call of God on Thursday June 25. He was 70 years old when he left this world. The burial arrangement will be announced by the family. However, considering the situation in the country, it is going to be a private arrangement, a family affair. In spite of everything, we still have to observe the COVID-19 protocols as established by the NCDC.”

He, however, enjoined sympathisers, who have been thronging the Sixth Avenue, Oluyole Estate residence of the deceased to always obey the NCDC guidelines on COVID-19 by washing their hands regularly with soap and water, using facemasks and keeping social distancing, to check the spread of coronavirus, which is currently at the level of community transmission.

Two condolence registers have been opened at the Oluyole Estate residence of the Ajimobis, where facilities have been provided at the two entrances of the expansive building for people to wash their hands.

Dignitaries that were at the residence of Ajimobi on Friday included Otunba Moses Adeyemo, who served as Ajimobi’s deputy governor from 2011 to 2019; former Head of Service and ex-Executive Assistant to Ajimobi on Administration, Soji Eniade; Secretary of APC in the state, Mojeed Olaoya; APC woman leader in the state, Mrs. Mabel Williams; former Commissioner for Local Government and Chieftaincy Matters, Bimbo Kolade; and chairman of Association of Local Government of Nigeria (ALGON) in the state, Prince Ayodeji Abass-Aleshinloye.

Makinde had said when he gave the directives: “I join the good people of Oyo Sjtate as we mourn the death of a statesman. I have directed that flags fly at half-mast in honour of our brother, friend and illustrious son of Oyo State. Surely, he will be remembered for leaving a blueprint for some of the activities that our administration is now undertaking. The Oyo State Government will be extending to his family, all the courtesies deserving of his personage.”

The demise of Ajimobi has triggered a wave of shock and grief among leaders, cutting across political parties, that have been paying glowing tributes to the astute leader. One of the figures is a chieftain of the APC in the state, Asiwaju Rotimi Ajanaku, who described the late governor as a political giant, towering intellectual and astute administrator as well as an articulate leader who made great impact in the state.

“I’m deeply anguished by the demise of our extremely valued political leader, a seasoned political brain, sharp mind, astute strategist, exemplary parliamentarian, exceptional communicator and outstanding governor after much battling to return to life within the short time he contracted the terrible virus.

“We have lost a great man blessed with mental cleverness, a superb sense of humour and charisma. He was a proficient administrator by profession and an efficient politician by passion. He made Oyo polity better and I am honoured to have been in the same party with him. We have lost a tiger of democracy and a powerful ally in the fight for the soul of our dear pacesetter’s state,” Ajanaku lamented.