'How Police Commissioner Impregnated, Abandoned Me With Baby' - Woman Tells Her Story In Nasarawa


The woman's reality is that her son's father had abandoned him from cradle and refused to be part of his life. 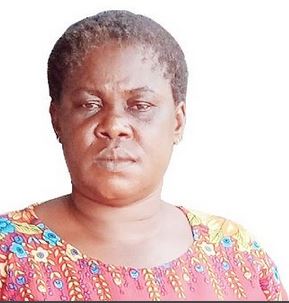 In the company of her only son, Ms Wanger Eunice Iortile, 42, sat quietly under the tattered roof of her austere beer palour at Mammy Market, opposite Nasarawa State Polytechnic, Lafia.

She was completely oblivious of the usually gay atmosphere around her shop as she cuddled his one and only eight-year-old son.

The baby boy, according to her, is a product of the years of intimate relationship he had with a now retired Commissioner of Police named Fatai Shittu while the latter was serving in Nasarawa State.

On his part, David, the eight-year-old product of the ill-fated affair, munched away on sweets in childhood innocence as if there was nothing in life to worry about.

But the reality, according to his distraught mother, is that his father had abandoned him from cradle and refused to be part of his life.

The situation has virtually turned Eunice into a recluse, such that not even the reporter had an inkling of the hell she was going through until she began to narrate her ordeal.

According to her, her hot romance with Shittu was the envy of many when they hit it off in Abuja about 17 years ago. But she recalled in an emotive voice that the past 11 years can be summed up as the worst of her life.

If she knew, she said, she would have heeded the retired police officer’s insistence that she should abort the pregnancy.

She said: “He (Shittu) is the father of my only son, but he left me even before the boy was born.

“My son and I have been through a very rough patch.

“It got to a point that I asked myself if Fatai Shittu is still the man I so much loved and we had the best of time together.”

Wiping tears off her eyes with the back of her hand as she spoke, she continued: “He was my best friend and we had a beautiful love affair. I met Fatai Shittu in Abuja (Wuse 11) in 2003. He was staying in the Kwara State Government Lodge, and we dated for nine years before I got pregnant for him.

“He used to patronise my elder sister’s drinking joint in Wuse II. That was where I met him and we started the relationship.

“When he was later transferred to the Ebonyi State Police Command in 2006, we went together and spent about a year there before he was transferred back to Abuja.

“I was like a wife to him because his family stays in Ogun State where he comes from.

“We were so close, and within this period, I never dated any other man until in 2010 when I took in for him.

“He threatened me and tried to force me to have an abortion but I refused.

“He insisted that I should abort the pregnancy because he was about to retire from the service to meet his family in Ogun State.

“When I refused to abort the pregnancy, he told me that if I was delivered of a baby girl, he would take it because he didn’t have a girl among his children. But if it was a baby boy, he would not take it.

“After a heated argument, he agreed to take responsibility for the baby.

“He eventually retired in 2010 as a Commissioner of Police at the Force Headquarters in Abuja.

“When he was relocating to his village in Ogun State, he gave me N150,000 to take care of myself and start a business, promising to take care of the baby when delivered. We were in constant touch on the phone.

“Since then, he stopped picking my calls until in April 2018 when he picked it and told me not to disturb him again as he was enjoying his retirement with his family in Ogun State.

“Since then, I have shut myself within me. It has been an immense emotional damage and I have been carrying all the stress of life by myself.

“He has refused to hear me out. I wanted him to hear me out, to show that he cares about how I feel and to notice what I am going through.”

Eunice recalled that life became so difficult for her in Abuja that taking care of herself and her little boy became difficult.

She said: “I decided to relocate to Lafia in January 2017 to start a beer parlour. But it is not moving, and I can’t afford the little boy’s school fees and take care of his needs.

“If he denies that he is not my son’s father, let him come so that we can go for DNA test. Where does he want me to take his son to?

“He is the biological father of my son, and it is better he comes out and take responsibility.” 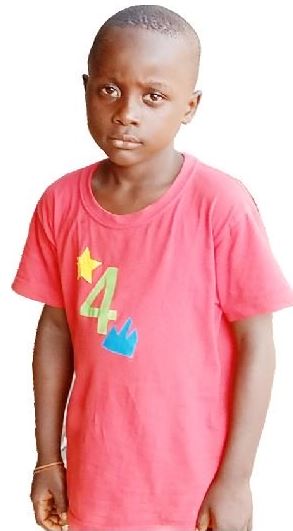 Lending his voice to his mother’s cry that his father should have a rethink, eight-year-old David said in an emotion laden voice: “My father left us even before I was born. My mother was rejected and was alone when she delivered me.

“My father rejected the pregnancy but my mother refused to abort it. As a single parent, my mum summoned courage to bring me up.

“How I wish I knew my father! How I wish I met him! I was still in my mother’s womb when he fled and refused to take responsibility.

“Imagine the trauma of growing up without a father!

“But I thank God for the gift of a good mother. She sold her clothes and did all sorts of menial Jobs to take care of me.

“She has had to borrow money from people which resulted in so many insults and humiliation, just for her to see me through school.

She is doing her best to fill the vacuum left by my father who is enjoying his retirement in Ogun State and has refused to set his eyes on me or hear my voice.”

‘I want to become a lawyer’

David, a Primary 3 pupil, says his ambition is to become a lawyer or a reverend father when he grows up. He appealed to CP Shittu (rtd) to temper justice with mercy if his mother offended him and pick him up so that he would know his place of origin.

“I’m so much missing my daddy. I don’t know why he rejected me. My future is bright,” he said, bursting into tears.

Eunice said her dilemma now is that her son is very keen on meeting his father.

“He (Shittu) has not seen him since he was born, and he is being harassed in school because he cannot tell his school mates who his father is.

“He is nagging and I don’t think he is going to let go of this until he gets to the bottom of the matter.

“Even as little as he is, he is very intelligent and doing very well in school.

“I don’t just know what to do now as his father has refused to see him or hear from him.

“Initially, he was schooling at New Age Academy School in Lafia. The school fee was N12,000 but I cannot afford it now, so I transferred him to Eunice Christian Academy, Lafia where the school fee is N7,000 per term.

“Yet it is not easy to pay and still take care of his other needs.

“He constantly tells me he wants to be a lawyer or a reverend father.”

He, however, said he was not in the mode to respond to the reporter’s enquiries because he was busy.

“I know the woman you are talking about. I also know about the pregnancy,” he said. “But I’m very busy now. Let us talk later.”

However, subsequent calls made to his phone went unanswered.