Nigeria Immigration Service (NIS) has announced promotion of 3,548 staff across the country. 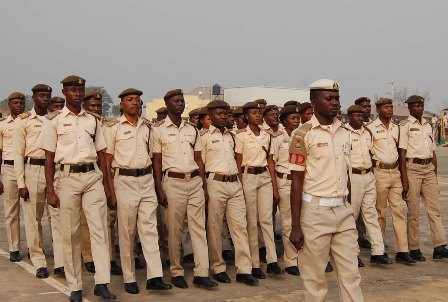 Nigeria Immigration Service
The Nigeria Immigration Service (NIS) has promoted 3,548 staff to enhance efficiency in service delivery.
The confirmation was given by the NIS Public Relations Officer, Service, Sunday James in a statement on Sunday.
James quoted Muhammad Babandede, the Comptroller General, NIS, as directing all the command offices nationwide to release the promotion list with immediate effect.
The CG said that the promoted staff were from the ranks of Immigration Assistants up to Inspectors of Immigration.
He congratulated the personnel and disclosed that they were promoted for hard work, discipline and loyalty.
However, Babandede has inaugurated the Forward Operations Base (FOB) at the Kwara State Command of NIS, to boost border patrol against illegal immigrants.
Babandede noted that the FOB at Okuta area of the state was the 13th of such base in Nigeria.
Top Stories