Four law enforcement officials who were spotted in a viral video manhandling a naked man now risk being suspended by the City of Cape Town. 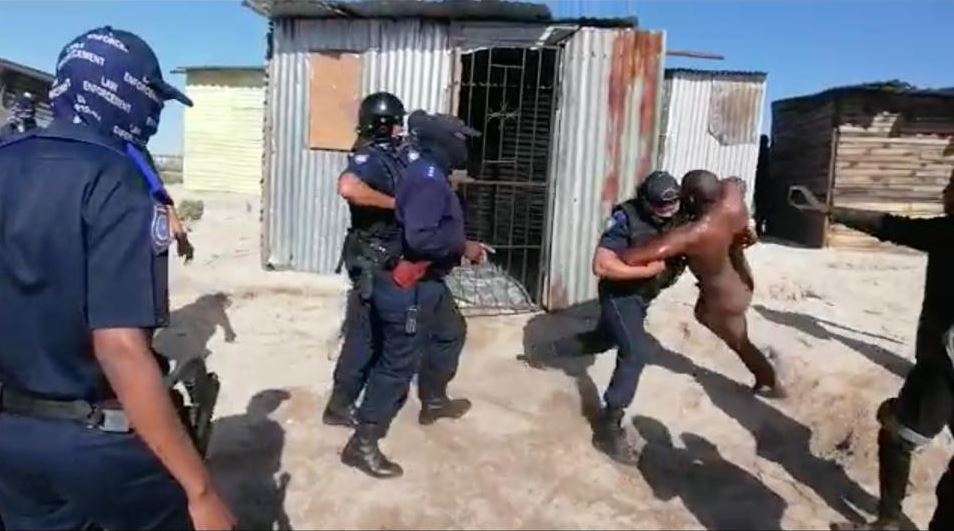 The City of Cape Town is in the process of suspending four law enforcement officials who were caught on camera manhandling a naked man in Khayelitsha.

In the video which went viral on Wednesday July 1, the man who was about bathing, was seen being dragged out of a shack and wrestled to the ground by officers. He however escaped from the officers and dashed back to his shack, which was partially torn down.

City of Cape Town law enforcement officers dragged this man out while he was taking a bath so they can demolish the shack at eThembeni near Khayelitsha.🙊🙊 pic.twitter.com/yDFIngrHgh

Reacting to the viral video in a statement released on Wednesday Night, the City's executive director for safety and security Richard Bosman said they have initiated plans of suspending and applying disciplinary procedures against the four law enforcement officials.

"The suspension also ensures that staff are not targeted while on duty. We are saddened by the conduct depicted on the video footage, and we do not condone any forceful and dehumanising conduct by our staff members.

"The City takes these allegations very seriously, and while our staff are subjected to very challenging circumstances while carrying out anti-land invasion operations, which are to protect land earmarked for housing opportunities and other services.

"We will not condone violence of any nature by law enforcement staff. I have asked for the facts to be gathered as a matter of urgency and that the investigation is concluded without delay.

"After the removal of illegal structures, new attempts are made to invade again on a daily basis. There is an interdict in place as well as a recent court order which allows only 49 households to temporarily remain on the land until after the lockdown," Bosman said.

"The City must also maintain this recent court order, which the community is aware of."