It has been discovered that the governor of Edo state didn't say the truth about a mistake found in his NYSC certificate. 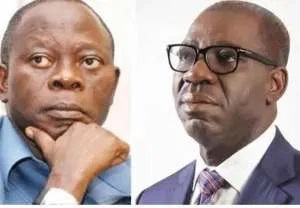 Adams Oshiomhole and Godwin Obaseki
Governor Godwin Obaseki of Edo state lied when he claimed in public that there was no problem with his certificate.
A report by Pulse has revealed that after the claim, the governor went in secret to correct the error.
In a report by the news medium, it discovered from documents made public by the Independent National Electoral Commission (INEC) that Edo State governor, Godwin Obaseki, was dishonest about a certificate issue that contributed to his exit from the All Progressives' Congress (APC).
Recall that the 63-year-old exited the APC on June 16, 2020, and joined the Peoples Democratic Party (PDP) days later after the party's screening committee disqualified him from contesting in its primary election which would have given him the ticket to contest for a second term in office.
When Jonathan Ayuba presented the committee's report to the party's now-disbanded National Working Committee (NWC) on June 12, he said Obaseki was not cleared because of inconsistencies in his higher school certificate and National Youth Service Corps (NYSC) certificate.
He said the seven-member committee observed that the governor's NYSC certificate bears the name 'Obasek' without the final letter 'i'.
"While this may be an error on the part of the issuing authority, we observed that the aspirant has not taken any step whatsoever to have the anomaly corrected by the issuing authority," the committee chairperson said.
Despite the committee's claim, the disqualification decision was believed to have been influenced by Adams Oshiomhole, Obaseki's predecessor and political ally turned adversary, who was the APC national chairman until last month. 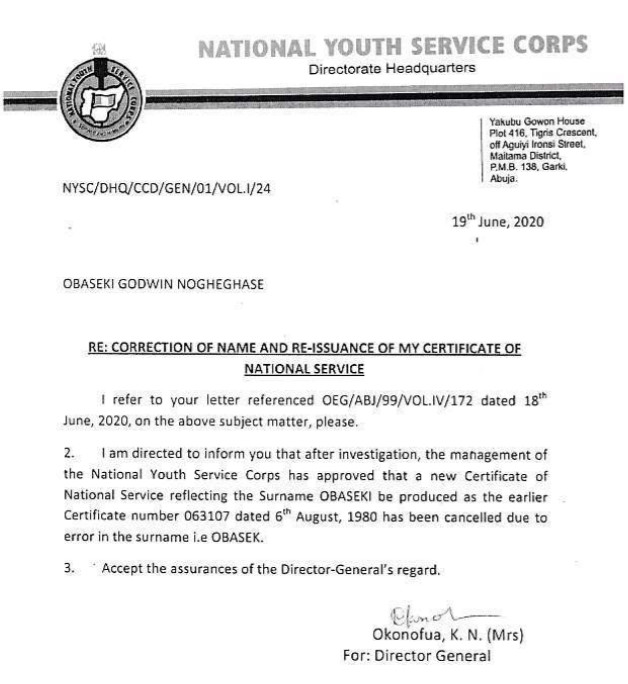 When questioned by journalists on the alleged deficiency with his NYSC certificate, Obaseki denied the committee's claim and said the missing letter was there on his document.
"If you look at that (the allegedly missing letter), it was like a cursive. It was written in a cursive manner," he told journalists moments after he announced his resignation from the APC immediately after a meeting with President Muhammadu Buhari in Abuja.
Documents made public have now revealed that the APC committee was correct and the governor made moves to rectify the error after he left the party.
On Thursday, July 2, INEC published the particulars of all 14 candidates who will contest in the Edo election both online and at its Edo State office for members of the public to scrutinise.
Among the documents displayed for the Edo governor were two that proved that his claims on the state of his certificate were only done as a performance for the public.
The first document, which carried an NYSC letterhead, was a letter signed by Mrs Okonofua K. N. on behalf of the NYSC's director general.
The letter, titled 'Re: Correction of name and re-issuance of my certificate for national service', acknowledged that Obaseki wrote the NYSC on June 18 to request issuance of a new certificate with his correct name.
The letter clearly acknowledged that Obaseki's NYSC certificate was indeed missing the final letter 'i' as observed by the APC committee and denied by the governor.
The document read, "I am directed to inform you that after investigation, the management of the National Youth Service Corps has approved that a new Certificate of National Service reflecting the Surname OBASEKI be produced as the earlier Certificate number 063107 dated 6th August, 1980 has been cancelled due to error in surname i.e OBASEK." 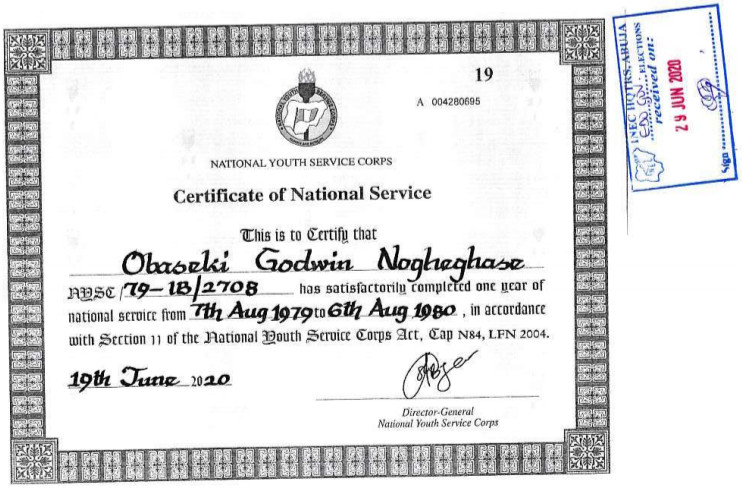