During interrogation, Anthony confessed luring his victims to his house under the guise of either buying their goods or selling his to them. 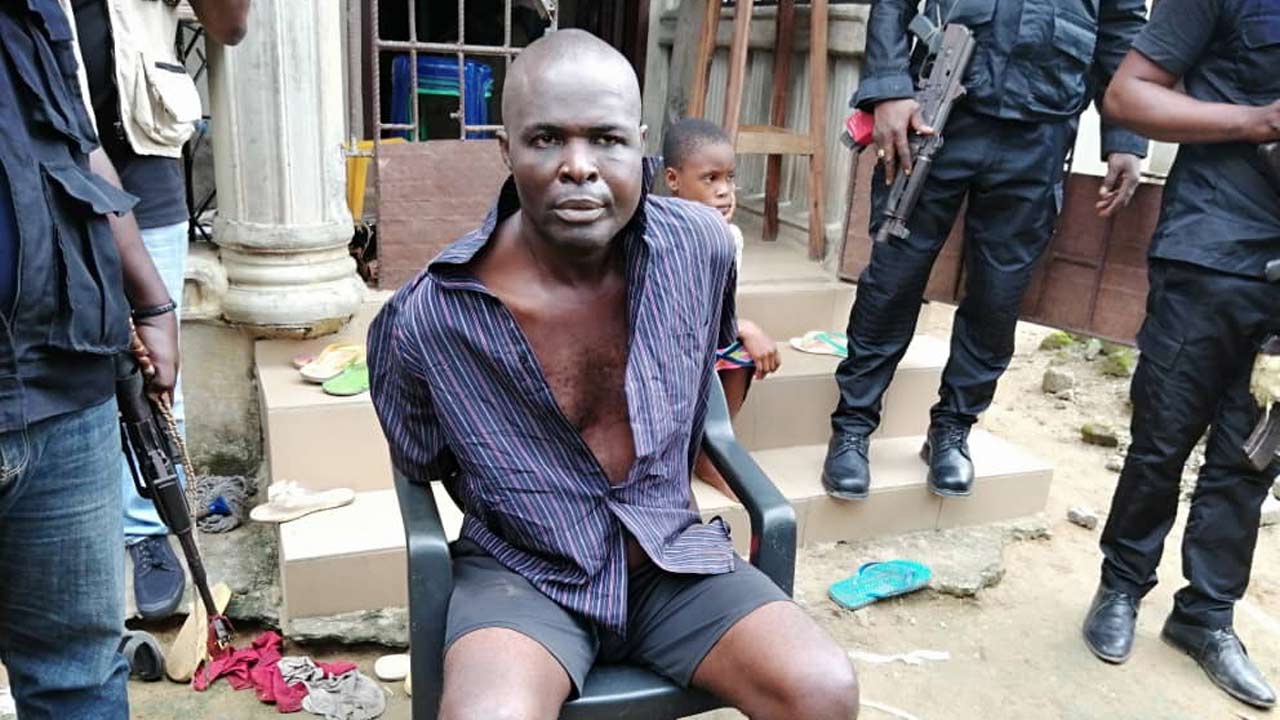 However, behind the visible business of buying and selling shoes, the 52-year-old indigene of Ngo-Okpala in Imo State, has other secret criminal ventures involving kidnapping and killing of his victims.

The neighbours of Anthony were stunned when he recently led a detachment of policemen to his house located at Umuebule 1 Community, Etche Local Government Area, Rivers State. His house is well-built.

It is a flat of about four bedrooms surrounded by a high fence. In fact, the fence, which is secured with a gate, made it impossible for neighbours to know what went on in the compound of Anthony. Little wonder, nobody around suspected Anthony and his bloody enterprise.

But within the compound is a pit dug very close to the fence and covered with columns of concrete. Innocent people, who entered his compound, thought it was a mere soak away pit. Only Anthony knew that the pit was not meant for sewage alone but burial ground for victims of his illicit trade.

In his compound, he confessed to kidnapping people, strangling them and dumping their remains in the pit. Most of his victims’ bodies had completely decayed remaining their skulls. But one was still fresh when the Commissioner of Police in Rivers State, Joseph Mukan, engaged some youths in the area to pull them out.

During interrogation, Anthony confessed luring his victims to his house under the guise of either buying their goods or selling his to them. He would make his victims feel at home in his living room after offering them a special seat. He would even offer them drinks. But in the process, Anthony said he would go behind them, held their necks with his hands and twist them.

After confirming that they were dead, Anthony said he would drag them to his well-secured compound and threw them into the pit. Though he said he lived with his wife and four children, it was discovered that the wife of Anthony fled the compound before nemesis caught up with him while two of his grown children were no longer living with him.

Anthony said he started kidnapping and murder in February, adding that he had so far killed four of his business partners. He said three of his victims were Togolese while one came from Aba in Abia State.

He said: “I sell shoes. How I get them is I will always lure them to bring shoes to my house. When they bring them I will tell them to sit down. When they had sat down I will go through their back and strangle them to death. I have been doing this for awhile now.

“I collect their shoes when I kill them. I also get money. After I did this last one, police started investigating it and they started looking for me. One of my customers called me to come when I got there police arrested me.”

He added: “I live here with my family. I kidnap people and kill them. I strangle them. I invite and bring them to my house. Some are my business partners. I ask them to come and supply me goods or to come to my house and buy from me.

“They bring their shoes to my house. I started this February this year. Since then, I have kidnapped and killed four people. I kill them and throw them into the soak away pit. My wife goes to the market always. And people can’t see me because the area is fenced”.

Anthony said he started kidnapping because of poverty adding that he had so far received N800,000 from his victims’ families. The last operation that blew his cover involved his business partner, Ajumiene Ofor, from Aba in Abia State.

A source, who spoke in confidence, said the victim supplied him shoes worth N500,000 on credit. Anthony told his victim to come to his house for payment. On arrival at his house, the man sent the address to his wife in Aba.

The source said: “The discovery was made when a trader from Aba in Abia State left the address and phone number of the suspect with his wife upon departure to collect the sum of N500,000 being cost of goods supplied to the suspect on credit.

“After waiting for 48 hours without any sign of her husband back the wife of the victim reported to the police, who launched investigations into the matter. On interrogation the suspect took the police to his house where fresh corpses were recovered from a 20-fit soak-away pit exclusively dug for dumping of corpses.

Police Public Relations Officer (PPRO), Nnamdi Omoni, said: “Operatives of the Aniti-Kidnapping Unit, in a Sting Operation on 29/6/20202 at about 1330hrs, arrested a notorious kidnapper and serial killer, one Anthony Ndubuisi ‘m’ from Ngo-Okpala in Imo State but resides at Umuebulu Etche LGA.

“The suspect who was arrested through intelligence led policing, on interrogation confessed to have carried out several kidnappings and killings of his unsuspecting victims, including three Foreign Nationals and a Nigerian. The recent, being the kidnapping and killing of one Ajumiene Offor who was lured from Aba to his house, for a business transaction but kidnapped and killed on 9/6/2020.

“In the course of investigation, the suspect led Operatives to his house at Umuebulu, where he pointed to a Septic Tank that contained the bodies of his victims. On exhumation, we recovered three human skulls and the decomposing body of his recent victim. They have been evacuated and taken to the mortuary for autopsy.

“Investigation is ongoing and efforts have been intensified to arrest other members of his deadly gang. In the wake of his arrest, two Pump action guns and some Cartridges were recovered”.

Commissioner of Police, Joseph Mukan, condemned the incident and declared total war against perpetrator of heinous crimes in the state. He further advised members of the public to increase their security consciousness and report all suspicious characters and movements to the police.