A heartless couple who drove nails into the head of their housemaid have landed in serious trouble. 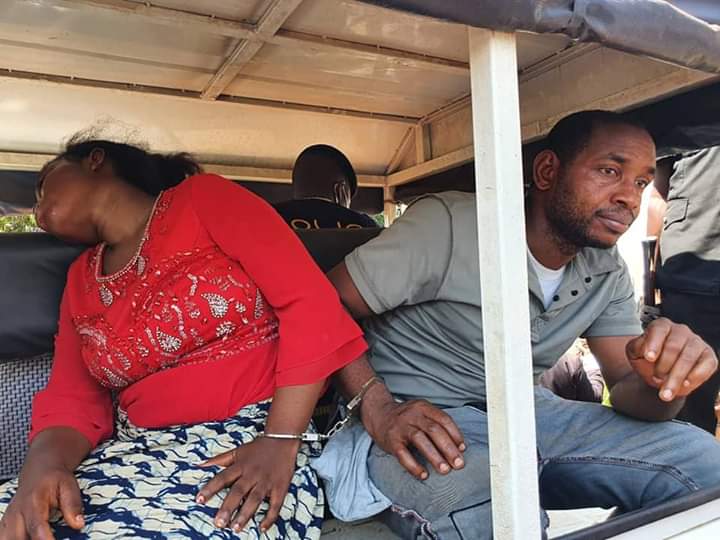 The couple after they were arrested
Mr and Mrs Jude and Ifeoma Ozougwu, who were arrested over the weeken for drilling nails, hot electric iron and pepper in different body parts of 10 years old Miss Nneoma Nnadi in Enugu have been remanded in custody.
The order for their remand was given by Justice J I. Agu of Enugu Magistrate court. The couple will be remanded at the Nsukka Correctional Center,
The police charged the Ozougwus’ with unlawful attempt to kill, unlawfully intent to harm and engaging a little girl in hazardous, injurious and exploitative work against her physical and socio-psychological development.
The Magistrate turned down bail application for the couple, moreso when the police prosecutor opposed the application.
Magistrate Agu said, “In exercise of my discretion, the offence is grievous going by the count one and count three of the charges; even as the girl is still hospitalised as well as the overwhelming public outcry; I reject the application for bail.
“I hereby remand the couple in Nsukka correctional facility pending further advice by the state’s Directorate of Public Prosecution (DPP).
“The matter is adjourned until Aug. 13 after hearing from the DPP.”
Defence counsel for the Ozougwus’, Mr Emeka Orji, had prayed the court to discountenance the various public sentiments on the matter and grant bail to his clients but was overruled.
Meanwhile, the WomenAids Collective, WACOL, has praised police intervention in the arrest and prosecution of the couple.
Founder of WACOL, Prof Joy Ezeilo also disclosed that many Lawyers have indicated an interest in giving free legal service for diligent prosecution of the matter.
In a news conference after the court session, Ezeilo described Ozougwu’s home as a “house of horror,” adding that the couple deserves psychiatric attention.
Top Stories