A Nigerian woman has shared her experience after she nearly committed suicide over botched cosmetic surgery. 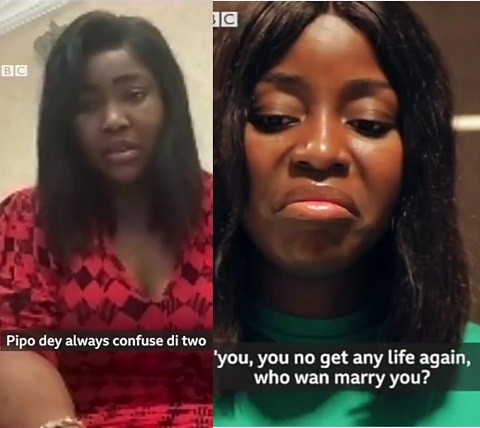 Dr Anu and Omotola Taiwo Temilade
A slay queen who wanted the perfect body but was left fighting for her life after the cosmetic surgery has finally opened up about the incident.
28-year-old Omotola Taiwo Temilade popularly known as Omohtee on Twitter confessed that she nearly committed suicide after a failed cosmetic surgery by MedContour boss, Dr. Anu.
The slay Queen had called out the doctor a few weeks back over a botched surgery she says has cost her N1.2 million.
Speaking to BBC Pidgin, the 28yr old said she felt insecure about her body and wanted a flat stomach and a bigger bumbum, hence she went to seek Dr. Anu’s help at MedContour.
She opted for a Brazilian Butt Lift and Liposuction to make her look sexier and more acceptable to herself.
Crying on camera, she narrated however that the operation failed and she has spent millions of Naira treating herself for extreme side effects.
She said her body has been a mess since the surgery was completed.
“After the surgery, I started having complications. I started having belly burns, waist burns, waist numb, and after two months I started having fat necrosis. She said.
“Fat necrosis is when liquid fat that has turned into dirt starts coming out. The thing will just come out like boil, e go come burst, start to dey comot the fat. Up till now, my waist is still numb. As I stand up like this, my body is not complete. One is bigger than the other.”
This slay Queen has not been able to o bathe by herself since the surgery and has been suicide. She said she often wonders who will want to settle down with her now that everyone knows she has had cosmetic surgery.
Reacting to the allegations, Dr. Anu blamed Omohtee for not continuing with follow up treatments after the surgery.
“She come hospital come see us for follow up when she get issues. And usually, when you advice patients on wetin to do after surgery and them no follow am because dem feel say dey Sabi how to take care of themselves e dey give issues and at the end of the day, them go say na doctor cause am.”
Dr. Anu said further that although she is qualified to perform cosmetic surgery, she has never claimed to be a plastic surgeon.
Slay Queen Omohtee however reiterated that she shared her story so that other girls can learn from her experience.
See the Video below: