Magu is still being interrogated by the Justice Ayo Salami-led Presidential panel along with seven of his aides. 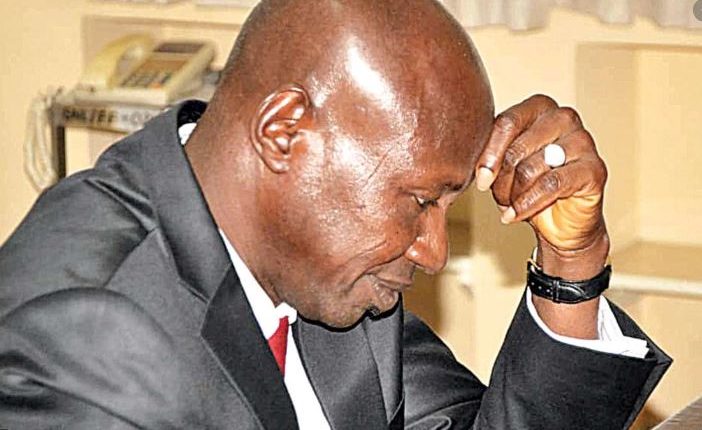 Obviously sensing that the Presidency may keep him in detention indefinitely until he answers allegations made against him by the Attorney-General, embattled Acting Chairman of the Economic and Financial Crimes Commission, EFCC, Ibrahim Magu, may go on hunger strike.

According to Vanguard, it was gathered, on Thursday, that some politicians and other wealthy Nigerians and foreigners, who alleged that they were duped by Magu and some operatives of the EFCC, are said to have started forwarding petitions on how they were coerced to part with huge sums of money and property under the guise of recovering ill-gotten wealth.

Magu, still being interrogated by the Justice Ayo Salami-led Presidential panel along with seven of his aides, reportedly got into trouble after information got to the Presidency about some of his dealings both in and outside the country.

The informants, according to sources, gave detailed information that prompted a shocked Presidency to immediately order his arrest, while the presidential panel was set up.

According to sources, people in rarefied circles of power, in and outside the country put together the details and delivered to the Presidency, prompting his arrest.

A Presidency source, Thursday night, said that Magu may not be released from detention until he responds satisfactorily to all allegations against him.

The source told Vanguard: “You are aware that they (detectives) have searched his house. Detectives that carried out the search combed his house. It was after the search that they arrested seven of his aides as part of the probe.

“Justice Salami is simply carrying out stern instructions from the Presidency over the issue of Magu and it was after he discovered that it will be virtually impossible to grant him bail that Magu started threatening to go on hunger strike, with a view to drawing public sympathy.

“However, it was learned that when the Presidency got information about his plans to go on strike, in insisted that the embattled EFCC acting chairman will not be released until he returns all the money he was accused of misappropriating.”