According to a survivor of the attack, Lanre Adeleke (Legacy), who was the then students’ union president, the then vice-chancellor, Wale Omole, was the sponsor of the deadly attack. 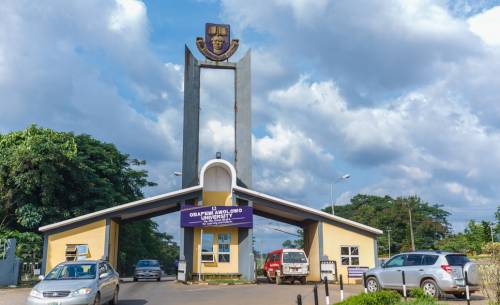 Today makes it 21 years after the bloody cult attack in which five students were murdered at Obafemi Awolowo University (OAU), Ile Ife.

It was Saturday, July 10, 1999, and the students killed included a 21-year-old 400-Level law student and the then Secretary-General of the Students Union, George Iwilade, popularly referred to as Afrika.

According to a survivor of the attack, Lanre Adeleke (Legacy), who was the then students’ union president, the then vice-chancellor, Wale Omole, was the sponsor of the deadly attack.

He told PREMIUM TIMES that his colleagues were killed in Blocks 5 and 8 of Awolowo Hall of the university, allegedly by members of Black Axe Confraternity.

While Mr Omole was accused of involvement in the attack, he has repeatedly denied the allegations and also said he was not found wanting by a panel of enquiry set up by the federal government through the Ministry of Education, then headed by Tunde Adeniran, a professor.

Mr Adeleke told PREMIUM TIMES the attack was carried out in 1999 with the intention to kill union leaders fighting against irregularities after Mr Iwilade had led students to a parade of nine members of the Black Axe Confraternity four months earlier.

He told our correspondent that he escaped being killed by jumping from the third floor of Block 8 of the Awolowo Hall where his room was.

While arrests were made thereafter, he is saddened that Nigeria’s corrupt judicial system allowed suspects to escape justice.

In an earlier report by PREMIUM TIMES, Mr Adeleke said: “We started the arrest from the day it happened. We went after some of them that we had their names. We were able to pick about 33 of them out of about 48, they were arraigned and we pursued the case in courts for good three and half years. For three and half years, I was practically doing nothing. We go to court almost every day to make sure justice prevailed.”

The matter was first handled by Justice Okoi Itam-led Judicial Commission of Inquiry, which rebuked Mr Omole’s administration before the matter was left for the court to decide.

“We were always in court because we wanted justice. Unfortunately, there were internal issues in Osun State then, which was part of the reasons why justice was not done. That was the real set back we had after three and a half years due to the complications of the judicial system itself,” Mr Adeleke told PREMIUM TIMES.

“Despite the fact (that) the judicial enquiry under the administration of Olusegun Obasanjo asked that the VC be tried, no government has made effort. No government has the morals.

“Even the bursar at that panel of enquiry confirmed to us what one of the cultists said; that they were given over N300,000 two days before the incident to buy ammunition for security reasons. It was established. The money was given to them on July 8 through one Kazeem Bello who was not even a student of Ife but a student of UNILAG. They arrested Kazeem then, and he made (a) confession.

“Despite evidence of identification by a witness who claimed to have seen Mr Idahosa, one of the suspects, with arms on the morning of the murder, and the confession of Kazeem Bello, the court held that he had no case to answer.”

Maintaining his demand for justice, Mr Adeleke, who is invited every year to give his account of the incident, insists that: “A criminal case is not something that ends like that. It has a long life. Even if we forget about those that were illegally discharged, what about others? I knew many of them ran away immediately after the attack but that’s not the issue.

“The issue of justice is not about arresting everybody. Even if it is few or even one or even Professor Wale Omole, people will have this sense of relief. The victory lies in how much we are able to make sure cultism do(es) not rise by bringing these people to book.”

In our earlier publication two years ago, Mr Omole did not return calls or reply to text messages sent. Meanwhile, in a telephone interview on Friday, he said: “the matter is gone and I don’t want to talk about it. Even my children have told me not to address the press on this again. People bring this allegation I know nothing about every year”, he concluded as he refused further comment.

Tayo Iwilade, a graduate of OAU, also speaks about the murder of his brother and others.

Mr Iwilade, currently a lawyer and rights activist, said the family monitored the criminal trial of three of the suspects, which ended in “circumstances we consider strange to date.”

For him, he wondered whether the investigative arm of the criminal justice system has delivered well on its duty towards the search for justice.

Meanwhile, 21 years after the attack, the constant clampdown on unionism has raised concerns over the security situation on campus. Students on several occasions have accused their colleagues’ exhibit tendencies similar to those of cultists.

This newspaper also reported how the institution suspended six students for involvement in cultism last year.

For the authority, the school’s chief security officer, Babatunde Oyatokun, said the university would keep working to maintain its reputation for a peaceful campus and zero tolerance for cultism.

The university spokesperson, Abiodun Olanrewaju, did not respond to enquiries as to when the student Union ban would be lifted.

Current students of the university will be holding a virtual conference today to discuss the past, present and future of students’ unionism amidst cult attacks across Nigeria.