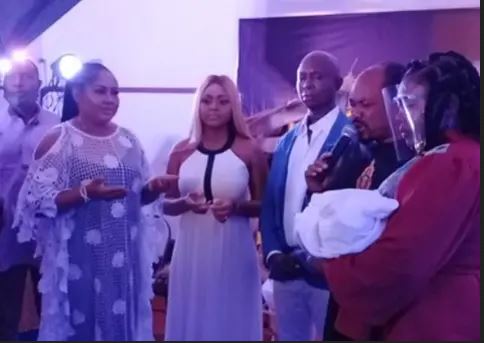 The Nwokos during the naming of their son.

The controversy surrounding the marriage of Nollywood actress, Regina Daniel to billionaire businessman and former member of the House of Representatives, Prince Ned Nwoko, was on Friday put to rest during the naming of their baby, Munir in Abuja, Saturday PUNCH reports.

The event attracted many Nollywood stars, including Oge Okoye and Segun Arinze.

The aggrieved lawyer and father of the actress, Jude Ojegwu, made a surprise appearance and told journalists that with the arrival of the baby, he had forgotten everything and accepted it as the wish of God.

Our correspondent reported that Ojegwu was said to have vehemently opposed the marriage between his daughter and Nwoko because of age differences.

During the event, Nwoko said he had yet to reach his target on the number of children he wanted, saying at the appropriate time, the target would be known.

Nwoko who said he would father more children according to Islamic faith, said he married the actress because she is peaceful, loving, disciplined and homely.

“My little boy is bearing my middle name, Munir. It means light. It is an Islamic name and I am a Muslim. I am still very young, I have my target when it comes to child-bearing and I have not reached my target yet. God speaks through man. So when the time comes, you will know. Regina is a lovely woman, patient, easy-going, homely, disciplined and peaceful”, he stated.

Ojegwu said the birth of Munir Nwoko, his grandson, made him change his mind for the sake of peace, joy and happiness.

He said, “The birth of this child has answered the question (about the controversy); everybody craves for peace, joy and happiness. I have accepted everything.

“I feel very happy having a grandchild and that is why I am here. I travelled all the way from Lagos to this place just to celebrate with the family. I told him (Nwoko) and the mother to call him Ifechukwude which means what God has written.”