A doctor took to social media to lament about a woman who got pregnant for the fourth time despite giving birth to children suffering from sickle cell anaemia. 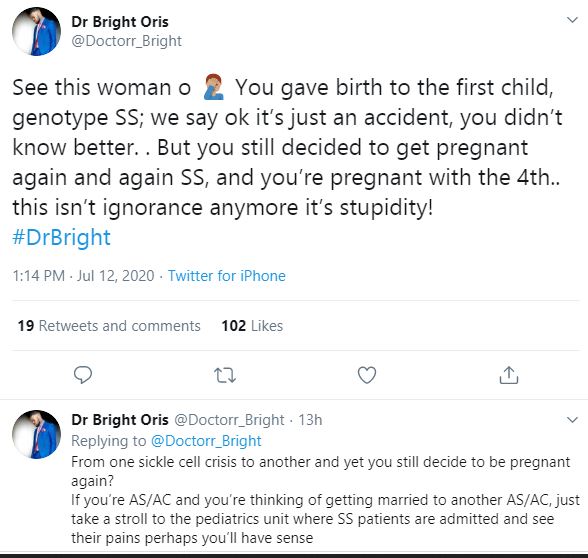 A Nigerian doctor has shared his encounter with a lady who got pregnant for the 4th time despite giving birth to three children with sickle cell anemia.

According to @doctorr_bright, the 4th pregnancy is no longer ignorance but stupidity.

"See this woman o You gave birth to the first child, genotype SS; we say ok it’s just an accident, you didn’t know better. . But you still decided to get pregnant again and again SS, and you’re pregnant with the 4th.. this isn’t ignorance anymore it’s stupidity!

From one sickle cell crisis to another and yet you still decide to be pregnant again? If you’re AS/AC and you’re thinking of getting married to another AS/AC, just take a stroll to the pediatrics unit where SS patients are admitted and see their pains perhaps you’ll have sense

After giving birth to the first child and having series of sickle cell crisis, I’m sure she would have been counseled on the issue severally... You can only claim to be ignorant about sickle cell if it’s your first ... any other child being SS doesn’t count as ignorance".