A Nigerian man has been condemned by his neighbours for attacking and beating his wife to stupor. 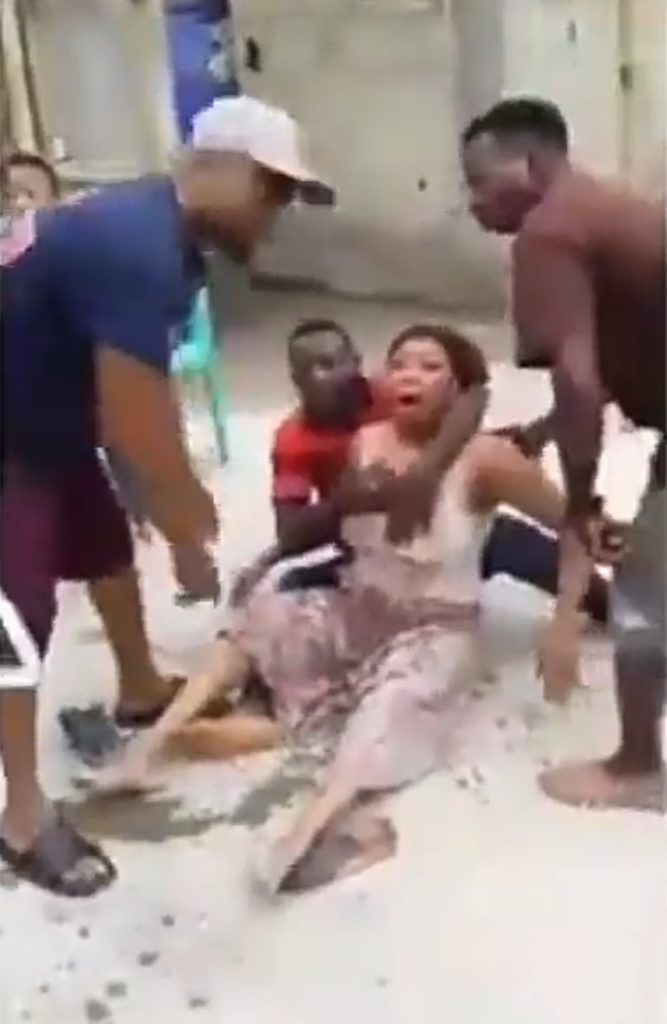 Woman beaten to stupor by the husband
A Nigerian man has been confronted by his neighbours for beating his wife to stupor.
The neighbours condemned the man's actions. The incident was caught in a video that has since gone viral.
In the video, the wife is seen with bruises all over her body as she sat within the compound while neighbours surrounded and consoled her.
The woman appeared to be weak as neighbours had to support her to prevent her from falling. They also criticized the husband for his actions as they tried to decide whether taking the woman to the hospital was the best option.
It later seemed like the woman was gasping for breath and one of her children began crying. When she seemed to have gained some strength, neighbours asked what happened and she claimed that her husband is in the habit of beating her. Her male neighbour then told her husband that his act isn’t right and even called his brother to caution him. The woman revealed that this angered her husband and he accused her of sleeping with the man and called her a prostitute.
The day her husband allegedly beat her up, she said her husband had a verbal altercation with the neighbour who did his best not to say anything to him.
She claims her husband then turned the anger on her and said the neighbour is able to disrespect him because she’s having sex with him. This accusation is what led to a fight between the couple.
She said:
For the past two months he’s been bringing issue, that I’m dating someone in our compound. Ok, that one was resolved. Since yesterday he’s been insulting me. I did not say even a word. But this morning there’s one of our neighbor that one called him, he did not answer. He was calling me ashawo. I said OK, you have girls like me, you have sisters like me. If me, I’m ashawo them that they married two or three times what did you call them? I’m not doing what you accused me of.
“When he was beating me last month, the man told him what you’re doing to your wife is not right. That’s the crime the man committed.”
She added that she got a job with with a bank but because the salary they offered her was more than what her husband earns, he allegedly told the company she won’t be accepting the job.
She added that after costing her a job, he finds it hard to provide and something as little as 100 Naira causes quarrel between them. As a result, she claims she resorts to begging her church members for money whenever she’s in need.