While being led in evidence by prosecuting counsel, Suleiman told the court how the Commission received an intelligence on the alleged fraudulent activities of the defendant. 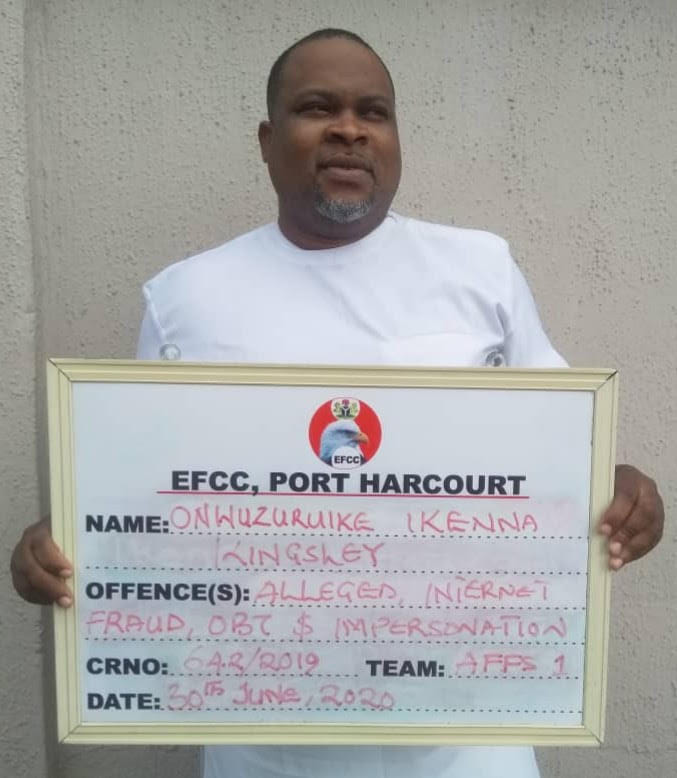 The Economic and Financial Crimes Commission, EFCC, on Monday, July 13, 2020 continued trial in the fraud charge bought against an alleged internet fraud kingpin, Onwuzuruike Ikenna Kingsley. The matter is before Justice A. T Mohammed of the Federal High Court sitting in Port Harcourt, Rivers State, and the prosecution presented its first witness, Abbas Suleiman, an Assistant Detective Superintendent(ADS) of the EFCC, before the court.

While being led in evidence by prosecuting counsel, M. T Iko, Suleiman told the court how the Commission, on receiving an intelligence on the alleged fraudulent activities of the defendant, commenced investigation which later led to his arrest in Umuahia, Abia State.

He stated that, the defendant was arrested with the following items: One Samsung Galaxy Phone, One iphoy 11, One black Dell laptop,Three Nigeria international Passports and One Accura car.

He also said the defendant was taken to “our Port Harcourt office, where he volunteered his statement in writing under caution”. Continuing, Suleiman disclosed that in the course of investigation, letters of investigation activities were written to Egypt Embassy, Thailand Embassy, United States Embassy and some banks, such as United Bank for Africa, UBA, Polaris and Ecobank, and responses were also received from them.

Iko sought the permission of the court to tender the letters of investigation activities in evidence and were accepted and marked as Exhibit A1 to E respectively.

Kingsley, a native of Umurokoala North local government area of Abia State, is being prosecuted on eight -count charges bordering on conspiracy, impersonation, forgery, possession of proceeds and obtaining money by false pretence to the tune of Eight Million, Five Hundred and Two Thousand Dollars ($8,502,000.00). He allegedly represented himself as one Jeff Sikora, President/CEO of Prime Trust Credit Union Bank in the United States of America, USA and used the false identity to defraud his victims, including an Egyptian who was defrauded of the sum of $6,500,000.00 on the pretext that he was a beneficiary of Inheritance Funds in a fixed deposit account of Prime Trust Financial Bank.

The defendant also received the sum of Two Thousand United States Dollars ($2,000) which was transferred to him by his syndicate member, one Obi Taxas (who is now at large) as part of his cut from the heist.

Meanwhile, Justice Mohammed adjourned the matter to 16th and 17th July, 2020 for continuation of trial.