The Minister of Niger Delta Affairs has also threatened to sue Joy Nunieh for accusing him of sexually harassing her. 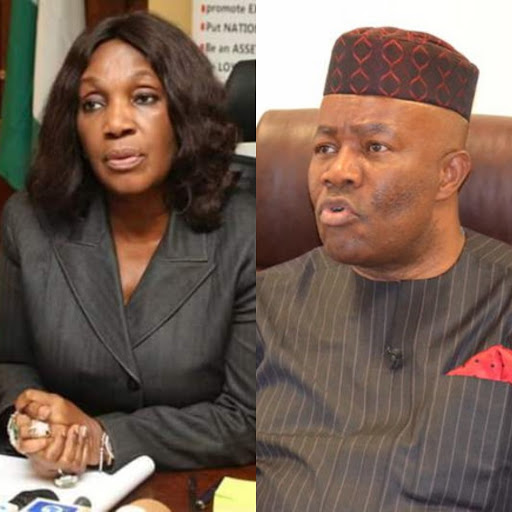 In a statement released by his media aide Anietie Ekong on Wednesday July 15, Akpabio denied making sexual advances at the former NDDC Acting MD. The former Governor who wondered why Nunieh did not speak out until the period the senate is probing the NDDC, insisted that he is contented with his wife.

Akpabio further disclosed that he has directed his lawyers to seek necessary “redress in a court of competent jurisdiction on his behalf over the defamatory statements made by Ms. Nunieh.”

“For the records, the Honourable Minister, Senator Godswill Akpabio, CON is happily married and content with his wife.

“Together they are blessed with children, four of whom are young women. The honourable minister is an avid believer of Affirmative Action and that was visible in the appointments he made as a two term executive governor of Akwa Ibom state between 2007 and 2015.

“He is the first governor in Akwa Ibom state to have a female deputy governor, was also the first to appoint female chief justices of the high court, recommended women for ministerial appointments one of whom was the Minister of Housing and Urban Development, and supported for appointment the first female vice-chancellor of the only Federal University in the state etc.

“If indeed the allegation was true. Waiting till July 10th and 13th 2020 when the National Assembly appears to be probing some of her actions as the Acting Managing Director of the Interim Management Committee (“IMC”) exposes her motive, especially at a time when the momentum for the Forensic Audit.

“Investigation of the NDDC is heating up and the truth is about to be unveiled for all to see? The critical question is who is afraid of the Forensic Audit at the NDDC? Who is Afraid of the Truth?

“There is no doubt that Ms. Nunieh’s attacks are both personal and sponsored.”