A homeless man has left many people really amazed after his amazing transformation photo surfaced online. 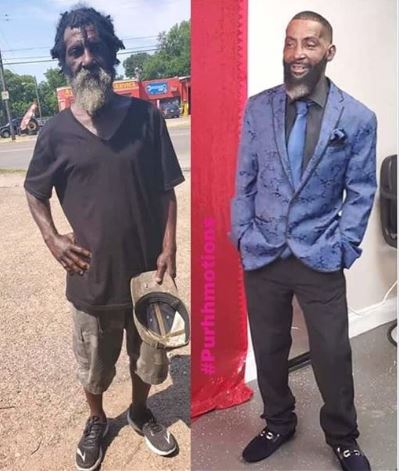 The homeless man witnessed a transformation after getting a free haircut
A homeless man has witnessed a remarkable transformation after a kind barber gave him a free haircut.
His before and after photo has left many social media users totally amazed.
According to Unapologetically Black, the man, who appears to be mentally ill has been homeless for more than two decades.
The man’s depressing state due to economic challenge left him with no choice than to seek respite on the street.
In the recent post on social media accompanied by the two photo collage, Unapologetically Black revealed that life finally smiled on the man after years of suffering neglect from society and his loved ones.
The photo shows the man in extremely tattered clothes in the frame on the left while the other shows him completely transformed after receiving a makeover.
''This man has been homeless for 20 years and a barber decided to give him a makeover for Father’s Day’’ the post read.
However, the story, which resonates with intense compassion didn’t reveal the man’s name along with other details.
Despite the gaps, the two photo collage showing the man’s striking positive transformation has evoked commentaries with many gushing about his impressive looks.
Gaylene Cromwell was quick to observe his great transformation.
She wrote: "Awesome. What a great transformation!!
Blessed are thee that help their fellow man!!"
Kenneth Alexander also said: "Wow what a difference!!! Awesome Job!!!"
The photo has, however, generated some suspicion from others who also observed that the person involved are two different personalities.
K Janine Pyle wrote: "See, this is how innocent men end up in jail because if you think that's the same man you're blind."
Top Stories