The serial killer also disclosed that a certain herbalist who he worked for was the one sending him on such assignments. 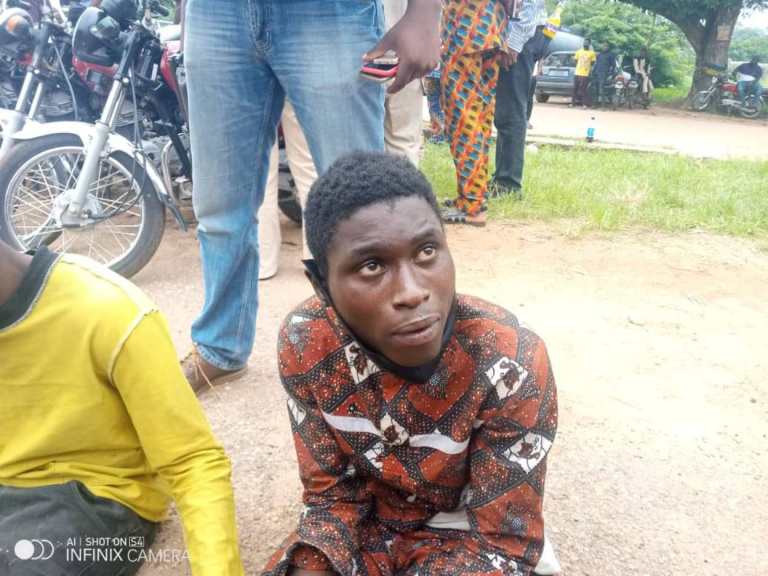 Following the manhunt launched by the Oyo State Police Command to apprehend the culprits in connection with killings at the Akinyele axis of the state, the suspected serial killer of the innocent victims have confessed on how he was able to catch on his targets, Vanguard reports.

While parading the suspected criminals at the police headquarters, Eleyele, Ibadan on Friday, one of the suspects, Sunday Sodipe (19 years), disclosed that a certain herbalist who he worked for, Adedokun Yinusa Ajani (50 years), was the one sending him on such assignments.

He explained that anytime he wanted to go for the operation, the herbalist would instruct him to kneel down in front of him and he (Ajani) would make some incantations and then put something on his tongue three times.

The suspected serial killer said whenever he located his victims, he would hit them with a shovel and when they laid in a pool of their blood, he would make some incantations and move around the body three times and then back it.

Sunday said he would back the body for about five minutes with his eyes closed before leaving the scene.

When asked if he was not afraid that anybody could come around while backing the body, the suspected serial killer said the herbalist had told him that nobody would come around during the period.

He said after the operation, he would return to the herbalist, who would make some incantations again.

He confessed that he had carried out five of such operations and anytime he returned to the herbalist, the 50-year-old would have bought food for him and would give him N500.

When asked for the reasons for the killings, Sunday said he didn’t know as it was the herbalist who was just sending him on such errands.

In his reaction, while speaking with journalist, the herbalist, whom Sodipe said usually send him on the killing spree, denied ever knowing him (Sodipe).

The herbalist said Sunday’s mother brought him to his house some time ago that he was a wayward child and he did some spiritual work for him.

He, however, said that after two months, she returned with the boy, asking him to learn how to become a herbalist.

“He had only spent six days with me when I told him to leave because I was not satisfied with his behaviour and it was not long after that that I was arrested by the police,” Ajani stated.

Earlier, the state Commissioner of Police, Joe Nwachukwu Enwonwu, had narrated how the police achieved the feat by arresting the suspects.

Enwonwu said the crimes coincided with the period he assumed office as the commissioner of police in the state and he immediately swung into action in a bid to bring the perpetrators to justice.

The police commissioner said the mobile phone of one of the victims was recovered from one Shehu Usman by the police,” and upon interrogation, the suspect denied his involvement in the crime but gave useful information which subsequently led to the arrest of Sodipe and Ajani.”

Enwonwu said the suspects were responsible for the killings of Wasilat Adeola, Barakat Bello, Grace Oshiagwu, Mojeed Tirimisiyu, who was just five years old, and the attack on Adeola Azeez and her daughter, Dolapo Oyeyemi, who both survived.

Recovered from the suspects are a hand shovel, a Techno mobile phone, an iPhone Xs Max and one itel phone.

The main suspect, Abiodun Oladejo (35), was allegedly responsible for the killing of a woman, Oluwasayo Fagbemi, who was killed in front of her house at Sasa area on June 24, while washing plates at about 5:40 a.m.

Three other suspects were also arrested in connection with the killing and another attempted murder case.

While speaking, Olasoji confessed how he killed his victim with a stick and wiped her blood with a handkerchief for ritual purposes.

Also, among those paraded by the police was a suspected rapist, Idowu Ajayi, who allegedly raped a 42-year-old physically-challenged woman, Kemi Adeniji, with three other suspects who are still at large.

The suspect, however, denied participating in the criminal act, as he claimed he was in his shop when the incident occurred.