BBNaija Housemates Cuddling And Gossiping About Each Other (Video)


As the BBNaija reality show gets more intense, housemates have been caught gossiping and cuddling. 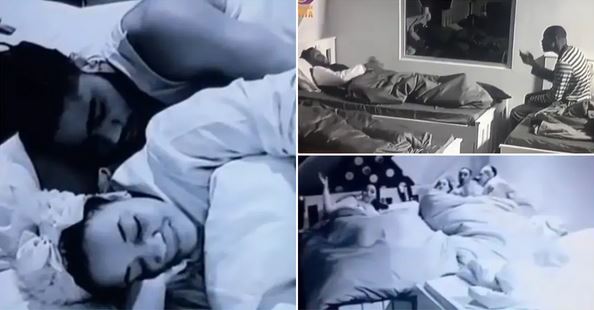 Big brother naija housemates gossiping and cuddling
Big Brother Naija 2020 housemates have continued to hold fans spellbound since Sunday after being unveiled.
After day two, the game has gotten more serious with some of the housemates gossiping about each other, while others engaged in little intimacy.
Brighto and Neo were caught in a clip gossiping and whispering to each other during bedtime when other housemates were fast asleep.
Asides from gossiping, the male and female BBNaija housemates of the season appear to be completely comfortable with each other as they have wasted no time when it comes to getting cosy.
However, many fans expect that in the days to come, the housemates who are comfortable now will start off the fight for which the house is known.
Also in the house, some of the housemates are not shying away from getting close. A clip from the house caught the moment endowed housemate Dorathy was seen calling on Praise and telling him that she is available for cuddling the next day.
Dorathy was alone in her bed while the young man was keeping a different female housemate warm in bed.
Still on cuddling in the house, male housemate Neo also had the time of his life at bedtime. The young man slept in between two female housemates.
It seems like Nengi has kept her eyes on Ozo as the camera has on numerous times caught her admiring the handsome stud.
See the clip below: