They were apprehended alongside an herbalist, Moses Oduntan, whom they consulted for spiritual support. 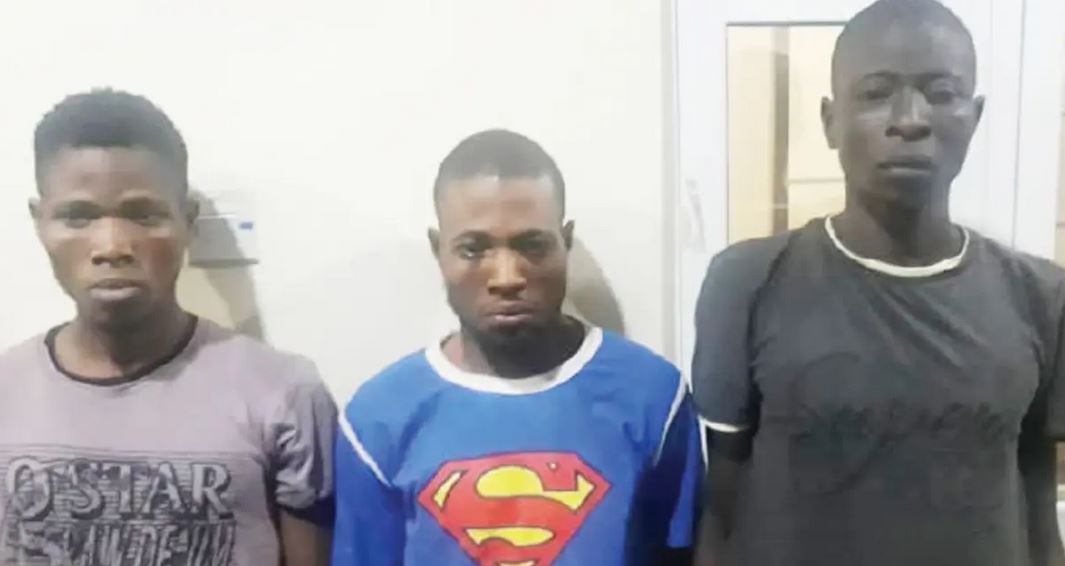 The brothers and the herbalist

Two brothers alleged to be members of a robbery gang operating in Ijebu Mushin, Ogun State, have been arrested by the police after they attacked an elderly man identified only as Pa Olutokunbo in the community and killed his 72-year-old wife, Christiana, Saturday PUNCH reports.

The siblings – Akinola Akeem and Muyiwa Akeem – reportedly robbed Olutokunbo of N550,000 and three phones after strangling his wife who raised the alarm during the operation.

They were apprehended alongside an herbalist, Moses Oduntan, whom they consulted for spiritual support.

City Round learnt that the brothers met with Oduntan aka Koba sometime in March to help them prepare money ritual for which he charged them N100,000.

When they could not raise the money, they decided to rob Olutokunbo and paid Oduntan N100,000 from the proceeds.

Christiana’s son, who lives abroad, was said to have petitioned the Inspector-General of Police, Mohammed Adamu, after which operatives of Intelligence Response Team launched a manhunt for the suspects.

It was gathered that one of the stolen phones was traced to a man who confessed to have bought it from Akinola.

Afterwards, Akinola was tracked down and he led detectives to arrest his younger brother, Muyiwa and Oduntan, a police source said.

The source stated, “The incident occurred on March 15, 2020. The brothers attacked the residence of Pa Olutokunbo, of Ikala Village in Ijebu Mushin and robbed him of the sum of N550,000. They also took three phones from his house and while the robbery was on, Pa Olutokunbo’s wife who was 72- year-old, started shouting for help.

“One of the robbers, Akinola Akeem, pulled the old woman into one of their rooms and strangled her to death. His brother, Mayowa Akeem, attempted to kill Pa Olutokunbo, but the old man pretended to have died and they left.”

Speaking to City Round during the week, Akinola, 29, said frustration led him and his brother to commit the crime.

The native of Ijebu Mushin explained that his brother got information about Olutokunbo at a bar while the old man was having a chat with some fun seekers.

He said, “I am a motorcycle rider. Thieves stole two of my motorcycles and I became frustrated. I have gone for three robbery operations. In the first operation, I got N5,000 and made N9,000 in the second one.  The third was at Ikala, where we killed the old woman.

“We got information about Pa Olutokunbo because he talked carelessly. He was in a bar and was talking about the money he had in his house. My brother overheard him and we consulted Koba (Oduntan) to prepare charms for us so that the operation would be successful.

“When we got there, we saw someone coming out from the man’s house and used that opportunity to gain entrance. We met four persons inside the house. The old woman started shouting and I took her into the room. She died while I was pulling her. My brother asked the man for the money in his house and he gave us N15,000.

“He held the man and threatened to kill him if he didn’t give us more money. The man begged and went into his room and brought out a bag containing money and gave it to us.  We saw charms on the money and informed Koba about it on the phone.”

He explained further that the herbalist warned them not to touch the money and asked them to bring it to his house immediately.

“He prepared soap for us and asked us to bathe with it. At the end, we did not get a dime. Koba fooled us. My brother and I were looking for a way of fighting him to get back our money when the police arrested us.”

In his account, Oduntan boasted that the soap was potent but blamed the brothers for not using it as instructed.

He said, “They came to me complaining that they were poor and wanted to be rich. I asked them to get N100,000 so I could prepare ritual for them. They said they didn’t have money. They later came to me that they heard that an old man had money in his house and they wanted to rob him.

“I consulted my oracle and it informed me that there was indeed money in the man’s house. I gave them charms which would enable them to get into the house and steal the money. They got the money and brought it to me. They gave me N100,000 to prepare ritual for them which I did but I don’t know why it didn’t work for them. My charms are potent.”