Luck has ran out on three boys who sexually assaulted a woman using a toy gun in Ogun state. 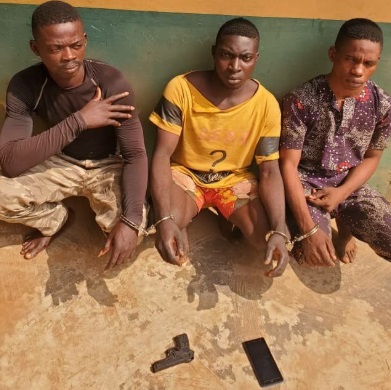 The cultists were arrested for sexually abusing a woman in Ogun
Three suspected members of a notorious criminal gang, One million Boys, have been apprehended by the police in Ogun state for allegedly gang-raping a lady.
A statement released by the spokesperson of the state police command, Abimbola Oyeyemi, said the suspects identified as Sola Olaoluwa, Ibrahim Kehinde, and Lukman Banjoko, were reported to have committed the act with two others said to be at large.
According to Oyeyemi, the suspects were arrested after the victim reported the case at the Pgijo Divisional Police Station. According to the victim, she met one Enny Money, who asked her to download an application on her phone with the assurance that the people she would meet on the app would help her financially.
“She further stated that as soon as she downloaded the app, one man whom she later knew to be the same Enny Money started chatting with her and invited her to Idimogun area of Ogijo.
On getting there, she was lured into a house where she was subsequently gang-raped by five men who called themselves members of One Million Boys.
The gang, according to the victim, forced her into submission when they pointed a gun at her and while they were taking turns to rape her, one of them was video recording the action with his phone.
Upon the report, the DPO Ogijo division, CSP Muhammed Suleiman, dispatched detectives to go after the hoodlums and bring them to justice. Around 5am on July 24, 2020, the detectives succeeded in arresting the duo of Sola Olaoluwa, 35; and Ibrahim Kehinde,19.
Their arrest led detectives to the third suspect, Lukman Banjoko, 20. On interrogation, the suspects made confessional statements that they committed the crime. They further confessed that the victim was the second person they gang-raped in that area.” the statement read
A toy gun which they used to threaten the victim and the phone used to record the rape incident, were recovered from the suspects.
Oyeyemi said efforts are ongoing to arrest the other two suspects that are currently at large.
Top Stories