Clutching placards depicting their plight, the senior citizens accused the state governor of frustrating them. 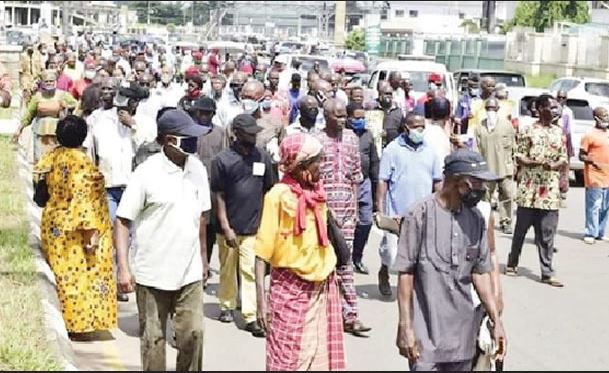 The PUNCH reports that no fewer than four pensioners were on Tuesday rushed to an undisclosed hospital as they slumped during a protest march in Owerri, the Imo state capital.

The retirees had blocked roads leading in and out of the state government house, demanding that the Governor Hope Uzodinma administration pay them their pensions and gratuities.

Clutching placards depicting their plight, the senior citizens accused the state governor of frustrating them.

One of the retirees, Mrs Margret Onuoha, who was revived, told journalists that despite retiring as a director on Grade Level 14, the government had continued to frustrate her.

Shedding tears, the woman said her husband, Eugene Onuoha, also a retiree died in the struggle in 2016 and was never paid till date.

The Chairman, Pensioners Intervention Committee in the state, Iyke Ohaneje, said that the government was not sincere to the retirees.

He said, “The government is owing us a total of 45 months, but we are asking government to pay us five months arrears accumulated since March 2020.”

The state Commissioner of Police, Issac Akinmoyede, who addressed the pensioners, assured them that their matter would be discussed at the state security meeting which holds on Wednesday.