The story has been told of the Nigerian woman who graduated from a UK university after being widowed with four kids. 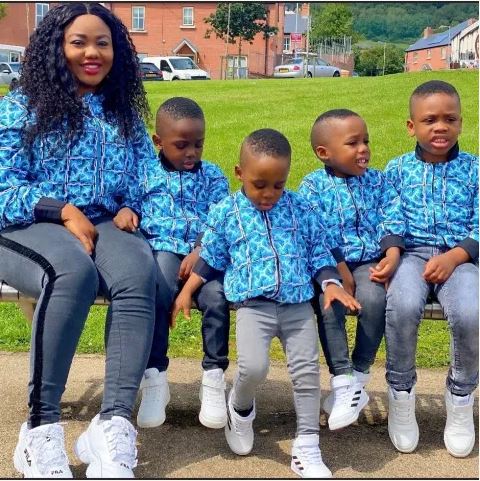 Sandra Isirima with her kids

When Sandra Isirima, 28, started her Master’s degree in September 2018, she thought she’d be graduating with her husband Michael and their four young boys by her side.

Michael was very supportive of her dream to study for a Master’s degree (MSc) in Leadership for Sustainable Development from the School of Biological Sciences at Queen’s University Belfast.

At the time, he was about to finish his PhD at the nearby University of Ulster.

But just three months after Sandra, who is originally from Nigeria, started her course, Michael fell ill and was diagnosed with stage four desmoplastic small round cell rumour cancer (in the stomach).

The couple were devastated when he was told he had just a few months to live.

Remembering Michael, Sandra, who is mum to Mike, six, Micah, four, and twin boys Mitchy and Myron, two, said: ‘Michael was a great dad to the boys. He loved his kids so much that his last wish was to spend the rest of his days with the boys. Even during his pain, he tried to keep a smiling face around them.

‘Michael was so hardworking and industrious. He was diagnosed with cancer in his final year of his PhD, but he never gave up on his dreams. He was so brave, he worked on his PhD even on his sick bed.

‘I and the kids picked up his degree on his behalf as he was awarded posthumously by Ulster University. His research was on fire safety engineering and Michael also volunteered with Fire NI during his PhD.’ 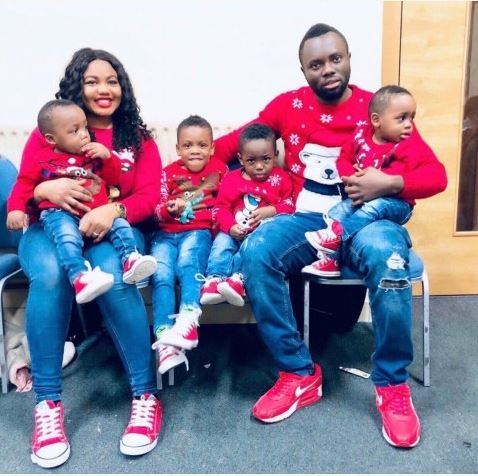 Despite his illness, Michael wanted to make sure that Sandra kept studying.

Initially, she struggled after his death, but always remembered what Michael had said to her about her degree.

She said: ‘Michael was so encouraging and supportive of me that he asked me to never give up on my dreams of getting my Master’s. He supported me in the little ways he could and always encouraged me not to drop out of school because of his illness.

‘I became a widow at the age of 27 with four young boys under the age of six. I felt like giving up everything. Then I remembered Michael’s wishes and after taking a good look at my boys, knowing I am their only surviving parent, all I wanted was to give them a better future.

‘I found courage, hope and strength, and I finally decided to go back to school to complete my Master’s degree.’

Today (28 July) Sandra will graduate from her course and says although it has been hard, she had a huge amount of support from her tutors at the School of Biological Sciences.

Sandra said: ‘Queen’s was so supportive of me during Michael’s illness, if I couldn’t meet a deadline because of what I was going through, they would give me a new one. My course coordinator kept in touch with me and made sure I was okay.

‘The thought of knowing I belonged to a community as supportive as Queen’s kept me going and gave me hope for the future. My course supervisor Dr Jude Stephens was so amazing and some of my course mates were present at my late husband’s memorial service to support me and my family in my darkest time. I am glad I have a family at Queen’s who cares about my welfare.’

She has already secured a job with Concentrix in Belfast, which means she will miss the actual ceremony today.

The ceremony is being streamed virtually because of the current coronavirus situation.

When she finishes work, she plans to stream the event at home and order takeaway to celebrate with her four boys.

Looking to the future, she said: ‘I am so excited to start my new job. After my graduation, I will focus on building my career, being a great mum and trying my best to give my kids the best in life. I plan to grow in my career and excel greatly. We hope for a better and brighter future.’