A woman took to Twitter to reveal why she ended her friendship with a lady. 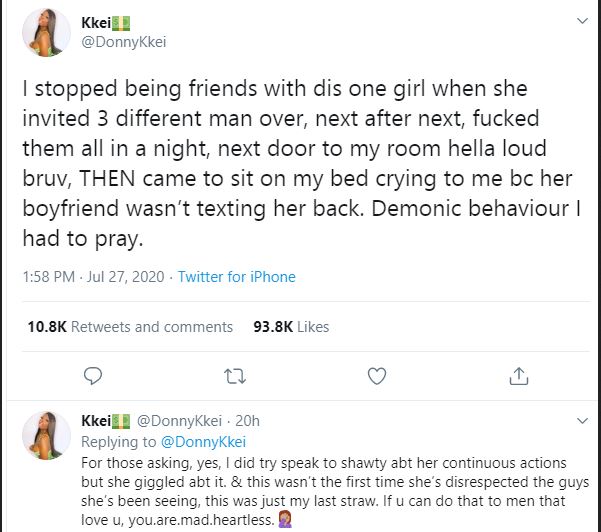 A Twitter user took to the platform to recount how she stopped being friends with a lady who had sex with 3 different men in one night and later came to her room to cry over her boyfriend.

According to @DonnyKkei, she had to cut her friend off after she complained to her that her boyfriend wasn't texting back because it was a "demonic behaviour".

"I stopped being friends with dis one girl when she invited 3 different man over, next after next, fucked them all in a night, next door to my room hella loud bruv, THEN came to sit on my bed crying to me bc her boyfriend wasn’t texting her back. Demonic behaviour I had to pray.

For those asking, yes, I did try speak to shawty abt her continuous actions but she giggled abt it. & this wasn’t the first time she’s disrespected the guys she’s been seeing, this was just my last straw. If u can do that to men that love u, you.are.mad.heartless".