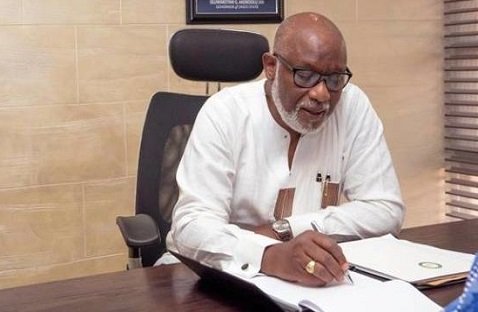 According to The Nation, the Ondo State Governor, Oluwarotimi Akeredolu has unveiled a former Commissioner in the Niger Delta Development Commission (NDDC) Lucky Ayedatiwa as his running mate for the October 10 governorship poll.

The Governor stated the decision to pick Ayedeatiwa was taken after wide consultations with party leaders.

According to him, “The leaders of the party have made wide consultations to choose the most suitable candidate as running mate in the forthcoming gubernatorial election in the state. We have concluded that Mr. Lucky Orimisan Aiyedatiwa is the appropriate choice given the prevailing circumstances in the political arena at present.

”This person has been with us since the beginning of this political journey in 2012. In arriving at this choice, some important factors assisted the leaders of this great party. We have decided to sever ties with mediocrity and treachery.

“There is indeed no art to find the mind’s construction in the face. We are also not in any position to change yesterday. We must, however, allow the experiences of the immediate past to guide our decision.

” A candidate with verifiable credentials and pedigree has been chosen to complete the last part of the gubernatorial race. We may not have chosen a saint and the best but let it not be said that we, either wittingly or otherwise, settle for an avowed hater of human beings and good things, an enemy of his own people and a serial forger. We owe our people the duty of care in this regard”.