A woman has received accolades for thriving in a male-dominated career to put food on the table. 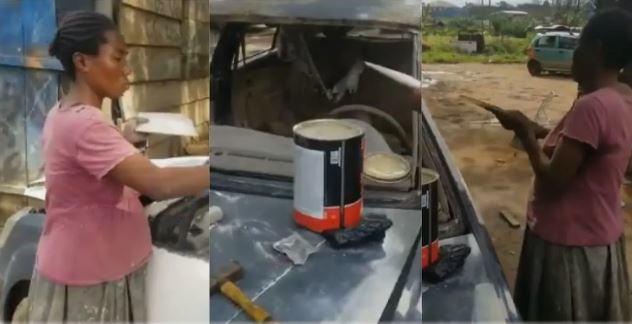 Madam Esther at work
Madam Esther has been praised after it emerged that she earns a living by repairing and spraying cars.
The technician is thriving in a male-dominated field.
The highly-skilled woman, who works as an auto body repair and spraying technician at Nkwakwa in the Eastern Region of Ghana, has been videoed carrying out her daily routine at a workshop.
Madam Esther has been working as a spraying technician and serving drivers in the Nkwakwa area with her rare expertise for over a decade.
The auto body repair and spraying industry lacks a commendable proportion of women working in the field. Mama Esther is one of the few female faces who have etched a niche in the male-dominated space.
When Mama Esther first started spraying, there wasn't enough female sprayers in the industry.
In spite of the near absence of equal representation in the spraying industry for women, Mama Esther has been able to earn her spot as a reliable and experienced sprayer who gives value for money.
Mama Esther is currently expecting her baby as a recent video that has surfaced online shows that she's heavily pregnant.
The expectant female sprayer is seen in the video skillfully working on a car. Her video continues to warm hearts with many describing her as an exemplary woman whose story is inspirational.
Watch the video below: