Wow! Meet Hafsat, The Mother Of 7 Children Who Became An Electrician Without Training In Jos


Hafsat Suleiman’s life changed one day in 2005 when she pulled out a faulty electric iron from under her bed. 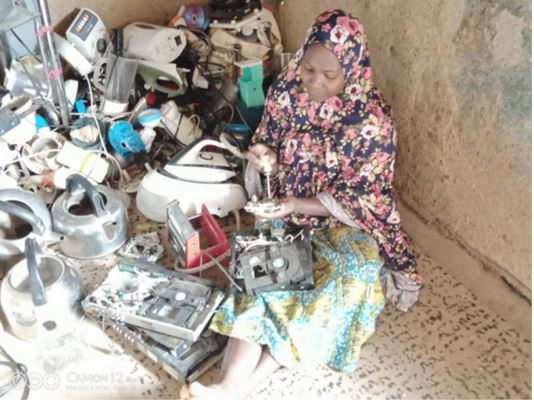 In Jos, Hafsat Suleiman’s home is a Mecca for faulty electrical appliances. She fixes them despite never having any training for the job and had never really spent any time in a workshop. Daily Trust reports on the circumstances that led this talented woman to plunge into a business hardly associated with women.

Hafsat Suleiman’s life changed one day in 2005 when she pulled out a faulty electric iron from under her bed.

The device had been abandoned there since her husband brought it back from an electrician who failed to fix it after keeping it in his workshop for a long time.

“Anytime I was sweeping my room, I would see the iron. One day, I asked my husband what was the main problem of the iron,” Hafsat said. “He told me that the element of the iron got bad but the technician had refused to fix it and that was why out of anger, he decided to bring it back.”

Hafsat had no idea what an element was at the time but days later, while doing her routine chores, she brought out the iron, washed it with clean water, and sunned it.

“After it dried, I cleaned everything inside the iron and coupled it,” she said. “When I plugged it, to my surprise, it started working.”

She would go on to tell her neighbours of her accomplishment and invited them to bring theirs for repairs.

“Before you know, the news was everywhere within my area,” she said.

People thronged her Angwan Rogo residence with their faulty electrical devices such as DVDs, radios, heaters, kettle heaters, blenders, standing fan, and irons and soon it became a business for her.

“When an element is faulty or any part of a device, I would be able to detect and work on it. If it has to do with changing a part for example, I do go to Jumma’a Mosque Street, where spare parts are sold, to buy a good one and fix it,” she said.

Hafsat had never been trained or attended any electrical workshop to gain the skills and she only learned along the way. She ditched her hair braiding handwork in favour of fixing electronic devices and she trained her two children the skill and eventually took them to a workshop to learn more.

“Being a Muslim and a married woman, it would be very difficult for me to go out and learn the skills because my religion and culture won’t allow that. That is why I never got the opportunity to acquire the knowledge anywhere,” she said.

“I got to understand the names of parts of the devices on the job, especially the element, which is one of the most important parts of electrical appliances. On the whole, I learned the skills through trial,” she said.

Her living room is now her workshop where even at midnight she could be found taking advantage of the power situation to keep her promises to her customers.

But her skills do not stop at fixing devices as she can now also do house wiring.

“In the course of repairing these appliances, I was able to learn how to do the wiring. So, apart from repairing electrical devices, I can equally do some simple room wiring. I can check sockets, lamp holders, and switches if faulty,” she said.

After 15 years on the job, she is pleased to have learned the skill as the money she makes from the works, has been very useful in doing a lot of things.

“I am achieving a lot with the money I am getting for the services I offer. I help myself and my family. I also assist my brothers and sisters, who have one problem or the other, including other people outside the home,” Hafsat said.

Her husband has been supportive of her work even though she is in a field not thought to be a woman’s.

“The fact that most of those seen repairing electrical appliances are men, does not make my husband dislike the job because whatever he asks me to do, I try my best to do it to his satisfaction. I leave whatever I am doing to attend to him,” she said.

It is not easy combining her chores and her work life but for her Hafsat, the formula is simple as she often interrupts her work to check on her cooking, and organises her chores before she sits down to work on electrical appliances. She also makes out time for her children.

“That has never been a problem,” she said. “I attend to them very well. I make sure that their food is often ready because I am dedicated to time and that is why, sometimes, I even have time to look after children of my neighbour not to talk of my own. To keep them busy, I give my small children something to play with while I am going about work.”

Considering her unconventional way of learning the craft, her approach to problem-solving approach is unorthodox. She doesn’t use a meter because she never learned how to use it.

“When you mention the problem of your device, I always use the power to check the problem. When there is no light, I wait until power is brought back. So, that is how I do my work. I know that it an important thing to use as an electrician or artisan because if there is no light, you will use it to detect some problems. For now, I have not started using it but I hope to use it in the nearest future,” Hafsat said.

Her passion for the job is very obvious and she is keen to see other women take it up.

“I love this job and call on fellow women to engage in it because it would help them and their family members. Women should not be discouraged because nothing is impossible,” Hafsat said.

Musa Ibrahim, Hafsat’s husband, said he was happy that his wife engages herself in electrical work, praying Almighty Allah to help her realize her dream.

“I am happy that my wife is good to that extent. It is not easy to have such a woman in our society because it is a job mostly known to men,” he said. “It is a good development in the family. I am very proud of her because sometimes people would troop to the house to see how she is working.”

He said because of how she has been conducting her business and catering for the family and himself, he always encourages her by buying work tools whenever he comes by some money.

For Hafsat, the satisfaction she derives from the job is such that she sees herself in this line of work for a long time. And that is good for everyone.