After an internal investigation, some officers of the Federal Road Safety Corps involved in an altercation with a man have been demoted. 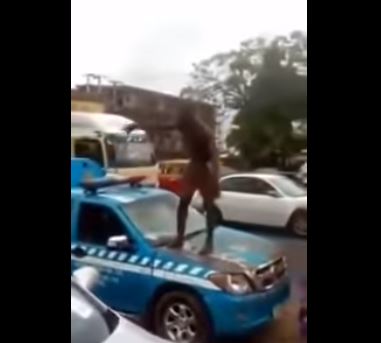 The man involved in an altercation with FRSC officials in Benin
Some officers of the Federal Road Safety Corps, FRSC have been demoted over an altercation with a tricycle rider in a video recorded in Benin, Edo state.
The officers reportedly assaulted the man after he stripped naked.
However, the traffic offender has also been charged to court.
The officers were demoted after a panel constituted by the Corps conducted an investigation into the incident. The recommended of the panel being that the 7-man patrol team involved in the incident be sanctioned with the award of loss of seniority and reduction in rank.
The case against the erring driver was filed in charge number; MEV/177C/2020, on 22 July, 2020  before His Worship, Magistrate( Mrs  E. Ojehumen at the Evbuoriaria Magistrate Court 8, Sapele road, Benin.
During the proceedings, the defendant pleaded not guilty to a 2 count charge bordering on breach of public peace and malicious damage of FRSC Patrol Vehicle.
The Counsel to the defendant eventually applied for bail which was granted by the Court, and the case was adjourned to 5 August, 2020 for further hearing.
The Corps Marshal  has further directed the  redeployment of the affected FRSC staff from their present Command in addition to the reduction in rank  that was awarded  by the Disciplinary Panel against the affected personnel  having been investigated and found liable of patrol misconduct, incivility, unprofessional and unethical behaviour towards a road traffic  offender; acts that contradict the patrol operational ethics of the Corps.
Watch video below:
Top Stories