A lady has been arrested and detained by the police for killing her boyfriend with a knife. 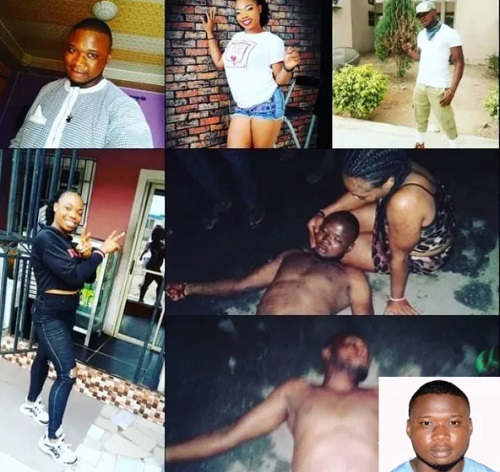 Auwal Sulaiman was stabbed to death by the girlfriend
The Lagos State Police Command has started investigation into the death of a 25-year-old man, Auwal Sulaiman allegedly stabbed to death by his live-in lover, Precious Okogbua.
According to Punch, the tragic incident happened at their residence in the Liverpool area of Apapa, Lagos State.
The state Police Public Relations Officer, Bala Elkana, said the suspect had been arrested and the case transferred to the State Criminal Investigation and Intelligence Department, Yaba, for investigation
He said, “On August 1, 2020, one Musa Abubakar, Manager, Island Village, off Liverpool, Apapa, came to the station and reported that on the same day, he received a phone call that one Precious Okogbua, stabbed her lover, Awal Sulaiman, in the neck with a knife.
“The victim was rushed to the General Hospital in Apapa, where he was confirmed dead. Upon close observation of the corpse, there was a mark of violence in his neck.
“We have transferred the suspect to the SCIID, Yaba, for discreet investigation and we have deposited the corpse in a mortuary for an autopsy.”
PUNCH Metro gathered that the lovers were at home when an argument bordering on infidelity ensued between them.
The argument, however, degenerated into a fight.
It was learnt that Sulaiman overpowered Okogbua and beat her up.
Okogbua was alleged to have, however, reached for a knife with which she stabbed the 25-year-old in the neck.
Sulaiman, who bled from the wound, fell as he writhed in pain.
PUNCH Metro gathered that some residents rushed to the scene and rushed the victim to the general hospital, where he was confirmed dead.
Top Stories