In the clip from the interview, BBC News Arabic journalist Maryam Toumi is speaking to her interviewee when there is a loud thud. 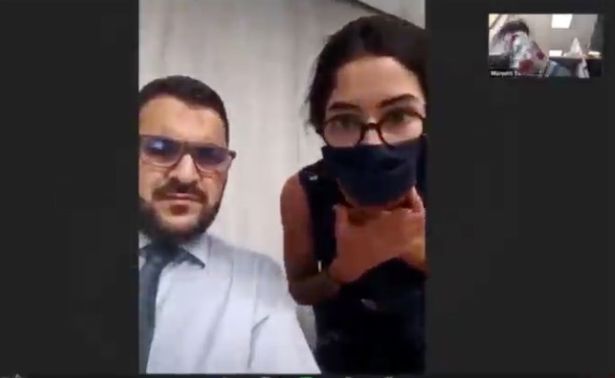 A BBC interview caught the moment a huge explosion rocked Lebanon's capital city Beirut – throwing a journalist across a room as she screams in terror.

More than 100 people have been killed and a further 4,000 injured in the deadly blast, thought to be caused by stored chemicals in a warehouse on Tuesday.

In the clip from the interview, BBC News Arabic journalist Maryam Toumi is speaking to her interviewee, Faisal Al-Aseel, project manager at the Moroccan Agency for Sustainable Energy, when there is a loud thud.

She pauses speaking for a second and looks around, when suddenly a deafening shockwave tears through her building and knocks her to the ground.

The camera appears to be on the floor and debris flies around the room, while Ms Toumi screams in the background and an ominous-sounding alarm starts ringing.

Looking shocked, Mr Al-Aseel and another woman watch as the journalist manages to straighten her camera and pull herself back onto her feet.

Hassan Diab, Lebanon's prime minister, has said that 2,750 tonnes of ammonium nitrate, a fertiliser, exploded in a warehouse at the port, Gulf News reports.

Mr Diab said: “The warehouse in which the explosion occurred is dangerous and has been in existence for 6 years.”

He also said those responsible for the “catastrophe” will be held to account in a televised address to the nation.

"What happened today will not pass without accountability," he said.

"Those responsible for this catastrophe will pay the price.”