A man tried to pop the question by spelling the words "Marry Me" out of candles but ended up burning his flat down instead. 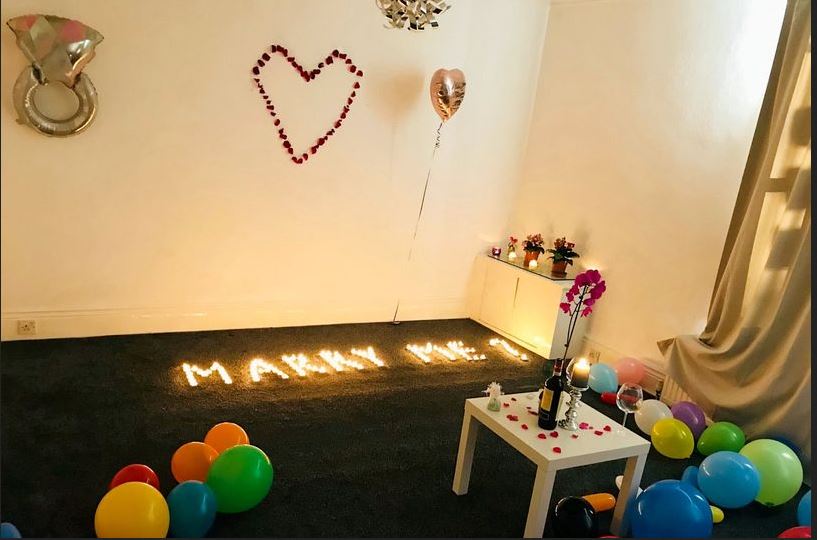 A hopeless romantic messed up his proposal by setting fire to his own flat.

The hapless fiance spelled out 'Marry Me?' in more than 100 candles for his girlfriend, but it soon turned to disaster when he burned down their flat.

The 26-year-old had decided to surprise his sweetheart by filling their living room with over candles and around 100 tealights and roughly 60 balloons.

Some of the lights he used to spell out 'Marry Me?' on the floor.

Albert then went out to pick up his love to bring her home for the surprise but after he left the flat caught fire. Three fire crews rushed to the scene at roughly 8.30pm after Valerija saw clouds of dark smoke emanating from their flat's door in Sheffield, Yorks.

With sirens wailing in the distance and their flat engulfed in flames, the love struck girlfriend said the all-important 'yes'.

The flat saw the studio flat gutted by flames or smoke damage. Albert said: "I was planning the proposal for over two weeks, I kept struggling to find the right thing to do to mark the special moment.

"I wanted to do something from my heart even if it didn't go exactly as planned.

"Valerija always says the most important thing is the small gestures every day  but I wanted to do something special for the proposal.

"I bought the most important thing, which was the ring, and I just needed to make sure the day was perfect.

"It didn't go exactly as I thought it would but she said yes, so I think the day took an unexpected turn but ended up exactly how I wanted it to."

Albert spent over four hours preparing his romantic setting, two of which were spent blowing up the balloons and lighting up the candles.

The besotted waiter spelled out the words 'Marry Me?' with tea lights, had a bottle of Chianti waiting for them, and had a non-stop romance playlist playing on a speaker.

Of all the things that Albert worried could go wrong, he never expected to find his home left in ashes.

He said: "I put balloons and candles everywhere, I had to go all out.

"I wanted to say something like she was the light of my heart, but maybe that was too much light.

"I was so nervous, this was the first time I have ever proposed and I hope it will be the last.

"I was so worried about everything going wrong I never imagined I could set the house on fire.

"But it will always be an unforgettable day for us and a story which will be amazing to tell our children."

Albert and Valerija have been together for just over a year after meeting on a dating website.

They're not sure when it will be safe for them to return but said the most important thing was that they were together after the "most beautiful" day in their lives.

"You can replace things in the house, but not our love for each other.

"In the end we're in good health and we're together, and that's all that matters."