One of them said the officer brought out a recorder and asked her to speak up with a promise that she would regain her freedom. 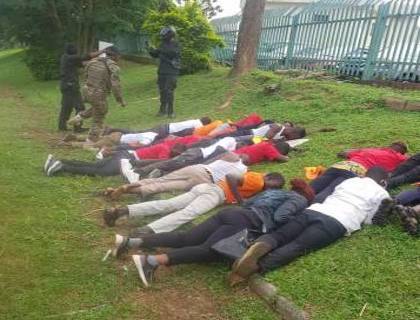 According to SaharaReporters, one of the protesters arrested in Abuja on Wednesday during the #RevolutionNow protest said the security operatives wanted them to make a false statement that they were paid for joining the protest.

The female protester, who pleaded not to be mentioned, told SaharaReporters on Thursday that the officers who arrested her asked her to mention the name of their sponsors and how much they were paid.

She said the officer brought out a recorder and asked her to speak up with a promise that she would regain her freedom.

She said, "When they brought us to the Eagle Square after they arrested us from Unity Fountain, two of the officers in black suit called me aside and asked to know our sponsors. They demanded that I should give them a name and how much they paid us.

"They said since I am a fine girl, I should not panic. They promised to release me and give me my mobile phones and that I would become their friend if I could mention the name of the mobilisers.

"I told them that we were not paid a kobo and that we joined the protest because nothing is working in the country. I said we were tired of the corruption in the country. "

No fewer than 40 protesters were arrested and brutalised by a combined team of security operatives at the Unity Fountain and Berger roundabouts during the peaceful protest.