The minister’s Personal Assistant, Grassroots, Shola Kolawole, visited the family on Saturday on behalf of his boss, who also offered a cash gift to the family. 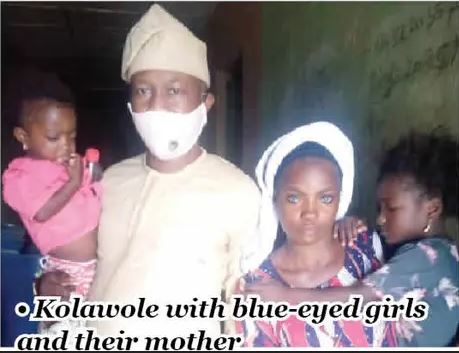 According to The PUNCH, the Minister of Youth and Sports Development, Sunday Dare, has offered scholarships to the children of a poor blue-eyed mother, Risikat Azeez, who was dumped by her husband, Abdul-Wasiu Omo-Dada.

The PUNCH recently released an exclusive video of Risikat, who said her husband abandoned her and two daughters because of the colour of their eyes.

The minister’s Personal Assistant, Grassroots, Shola Kolawole, visited the family on Saturday on behalf of his boss, who also offered a cash gift to the family.

“Her story was compelling and pitiable. Two young kids and mother abandoned by the husband through no fault of theirs. No kid should be denied education and a chance to live. I was moved by compassion. As an Ogbomoso indigene, they live next door to us in Ilorin. They are my neighbours. The Bible admonishes that we should love our neighbours that we see,” Dare said.

Dare’s intervention comes as cheery news for Risikat and her kids, who had never been to school,

“It’s my desire for my kids to be educated because my parents sent me to school within the limit of their capacity, which is not even adequate for me because I can’t speak (English). But it is my desire for my children to be well-educated if I have the funds and if God enables me.

“My first daughter, who is almost five years old, has never attended a school before, but I will like them to be educated,” Risikat said.