A heated fight ensued on Sunday night immediately after the live eviction between Lucy and Nengi. 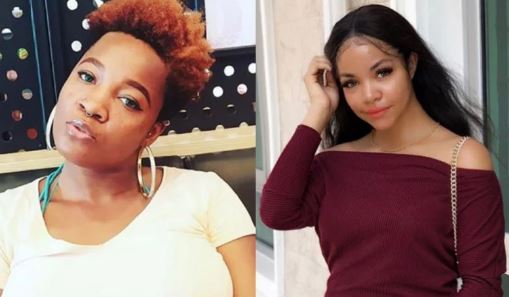 Lucy and Nengi
It is no longer news that BBNaija2020 housemates, Lucy and Nengi engaged each other in a war of words just after the live eviction show on Sunday that saw Eric and Tochi eliminated from the show.
The cause of the fight has now been revealed.
Tori News gathered that Nengi confronted Lucy for allegedly speaking at her back about her bathroom encounters with some of the male housemates. Nengi also accused Lucy of saying she leads men on in Big Brother House.
It was because of this that she confronted Lucy and things went out of hand.
At the end, the two were seen calling each other unprintable names.
During the exchange, Lucy, while the head of house Ozo tried to calm her down, she shouted at him, saying;
'Don’t touch me, if you are looking for who to touch go and touch her. She is the one that likes to be touched by men.'
Other housemates joined hands to prevent to prevent Lucy and Nengi from getting physical with the fight.
Shortly after the war of words, Ozo called on all the housemates for a meeting to address the fight.
Few of the housemates spoke about the issue, cautioning themselves to desist from name-calling and monitoring each other’s activities in the house.
Lucy then apologized to Nengi for her weighty statements during the fight, however Nengi made no comment during the meeting.
See some videos below;

Nengi and Lucy had a confrotation mad quarrel #bbnaija2020 pic.twitter.com/lnmNXs52gD

Lucy said “I can do PowerPoint presentation, but u don't know what it is. Ur brain is not in use" 😂😂😂#bbnaija2020
pic.twitter.com/B6U5mkAku8

I lowkey like this part of Lucy’s rant 😩😩😩😩😩😩#bbnaija pic.twitter.com/WgP24fxy8U

Fight oh: Characters are coming out 😂
Lucy was in the bathroom lamenting. Nengi knocked on the door saying hope it's not me you're talking to
Lucy:Alaye What if it's you
Nengi:Ameoba, old woman
Lucy: what do you do than walking around naked and seducing guys to pick you #BBNaija pic.twitter.com/NTZrLMwpDt