The Nigerian government has stated that the resumption date announced for international flights is not certain. 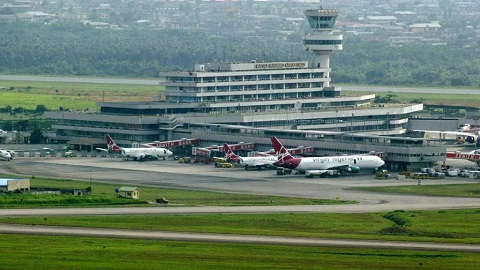 Airport
Presidential Task Force (PTF) on COVID-19 has clarified that the August 29 resumption of international flights is tentative and not certain.
According to NAN, the latest information was given by Coordinator, Sani Aliyu on Monday.
He said the date announced by Aviation Minister, Hadi Sirika, would be for consideration of resumption of flights.
Aliyu stressed that authorities must meet the criteria before international air transport is allowed.
“We will spend a whole day discussing international travel and how this will be done. And if I may clarify, we said from the 29th of August, we didn’t say on the 29th of August.
“So, very similar to what we did for the domestic flights. Don’t come back and say that we promised we will open on the 29th, but that date is not sacrosanct; but we will work towards it,” he stated.
Sirika said the airports had reached advanced stages of preparedness for the resumption of operations.
The flights would commence with the Nnamdi Azikiwe International Airport Abuja and the Murtala Muhammed International Airport Lagos.
Recall that a former presidential candidate, Omoyele Sowore had accused the FG of announcing a resumption date for international flights so that their wards and children can return to their schools abroad.
Top Stories