People Now Beg Me To Snap Pictures With Them - Mr. Calm Down Speaks About Finding Fame (Video)


A young boy who became popular on social media after video of his mother trying to discipline him has spoken about finding fame. 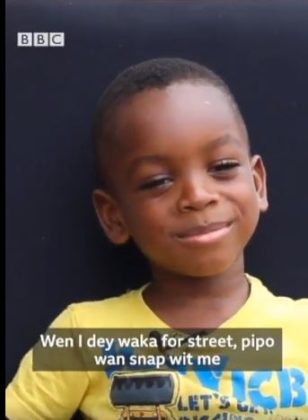 Oreofeoluwa Babalola
Latest internet sensation, Oreofeoluwa Babalola, has shared details about his new found fame.
Recall that he became an internet sensation after a video of him telling his mother to calm down when she wanted to discipline him went viral.
In an interview with BBC Pidgin, the 4 year-old said he likes mathematics and his future ambition is to be a police officer in order to help fight corruption.
Speaking on his new found fame, Oreoluwa said whenever he is walking on the street, everyone always wants to take pictures with him after seeking permission from his mum.
His mother revealed that he is very proactive and detests being idle. His hobbies are playing football and riding his bicycle.
According to her, Ore likes making funny comments and making people laugh.
She added that the video going viral was a form of blessing to the family, as their lives has changed.
See video interview below:

Sensation Speaks On Life After Fame. . Oreofeoluwa Babalola, the 4-year-old boy whose video went viral after telling his mother to calm down, has spoken on his new found fame. In a video interview with BBC Pidgin, the young boy said, whenever he walks on the street, people always indicate interest to take pictures with him and they seek permission from his mother. Oreofeoluwa, who said his favourite subject is mathematics, said his ambition is to become a police officer so as to fight corruption. Follow @mediagist for more exclusive updates.