Shocker! Again, Police Rescue 6-Year-Old Boy Locked Up By His Father For 12 Months In Kano (Photo)


It was gathered that the father had been arrested in connection with the inhumane act while the stepmother had fled. 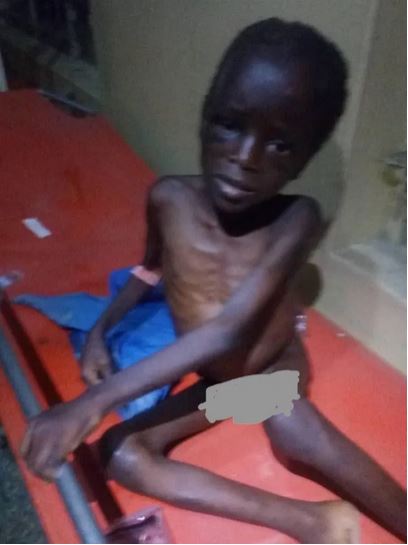 According to a Vanguard report, the operatives of the Kano State Police Command have again rescued a six years old orphan, Umar Ubale confined for 12 months by his father in Hanyi Fulani, Panshekara area of the state.

It was gathered that the father had been arrested in connection with the inhumane act while the stepmother had fled.

The orphan boy who was said to be left under the care of his stepmother since he lost his mum a couple of years back.

The operation leading to little Umar Ubale’s rescued was said to have been aided by a Human Right Network who alerted the police on the breach of human rights in the ancient city.

Head of the Network, Comrade A. A. Haruna described the trend as worrisome and a touching story.

He said that as usual “we were alerted by a good samaritan, and upon completion of our Investigations, we informed the security agents to do the needful.

“The boy was subjected to forms of dehumanization while in captivity. We uncovered the boy with a decaying skull arising from injury inflicted on him by his father.

“We have since evacuated the boy to Murtala Mohammed Special Hospital for medical attention,” Haruna said.

The spokesman of the State Police Command, DSP Abdullahi Haruna confirmed the development saying the boy’s father, Malam Ubale has been taken into custody, while the stepmother is on the run.

DSP Haruna however, assured the readiness of the Command’s readiness to bring the perpetrators to book.

With this brings the number of confined persons rescued in the state at five in less than two weeks.

Others were rescued in Kebbi, Sokoto and Borno States.