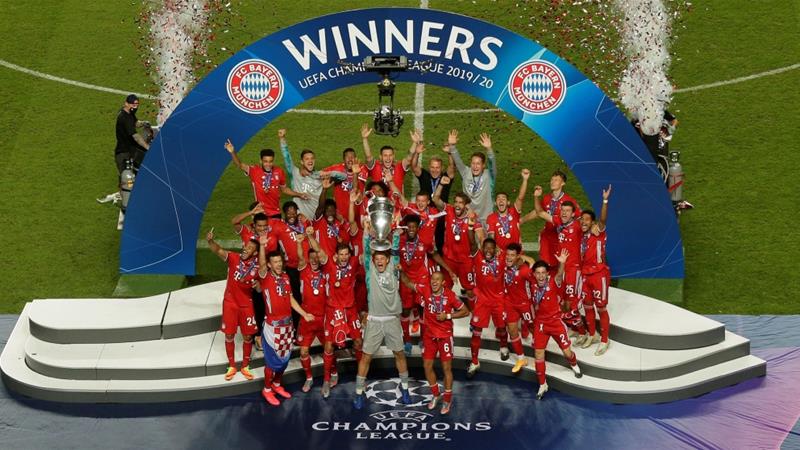 Bayern Munich, 2020 UEFA Champions League winners
German giants Bayern Munich defeated Paris Saint-Germain 1-0 in Lisbon to win this year's UEFA Champions League for the sixth time in the club’s history.
A goal by French winger Kingsley Coman was enough for the Munich side on Sunday to dash the Parisians’ dreams of winning for the first time the top club competition of European football.
The Paris-born Coman, a former Paris Saint-Germain player, nodded in at the back post from Joshua Kimmich’s cross in the 59th minute.
The final was played behind closed doors due to the coronavirus pandemic.
Bayern’s victory at the Estadio da Luz in Lisbon ensures a repeat of their 2013 treble, with coach Hansi Flick matching Jupp Heynckes in securing the continental crown, Bundesliga and German Cup titles in the coronavirus-extended 2019/20 season.
Paris Saint-Germain enjoyed their best-ever Champions League campaign by reaching the final for the first time.
Bayern join last year’s winners, Liverpool, as six-time champions of Europe, only behind AC Milan and Real Madrid, with seven and 13 titles, respectively.
The final was played behind closed doors at Lisbon’s Estadio da Luz due to the coronavirus pandemic [Manu Fernandez/Pool via Reuters]
“It is unbelievable. It has hardly been more fun than now playing for this team,” Manuel Neuer, Bayern’s captain and goalkeeper, told streaming portal DAZN.
“Hansi Flick has a huge share in this, the whole coaching staff. It was a team effort by everyone,” said Neuer, who made several big saves to win the elite trophy for the second time, the first being in 2013.
“We wanted it and we deserve it. It is a dream for all of us.”
Top Stories