A man who left his country for greener pastures has shared the inspiring story how he made it in a foreign land. 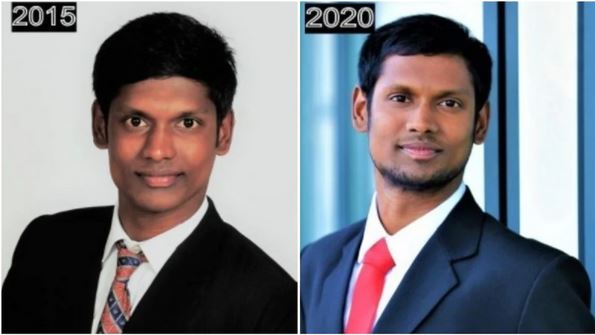 Kavin
A man identified as Kavin Chandrasekaran, has left an inspiring story for everyong on social media after narrating how he made it in Germany after moving to the country 5 years ago.
The Indian man took to his LinkedIn page to share his personal story.
He said he came to Germany in 2015 with dreams and some snacks from his mom. He added that he was the first person in his family to travel abroad.
In sharing pictures that showed how he progressed in five years, Kavin said the picture by the left showed when he first came to the foreign country while the second depicts how far he has come.
He said that before he made it, he was rejected several times without any concrete reason. As he celebrated his 5th anniversary in Germany, he thanked everyone who has offered him support.
After saying that he is excited to see what the next five years hold, he advised those who wanted to take the same step he took years ago to always be strong in the face of risks.
Many congratulated him as they wished Kavin more wins in his future endeavours. Below are some of the reactions:
Shapour Mehrkar said: "Dear Mr ChandrasekaranI am sure the person or the company who gave you the first oportunity to work for them would not have kept you if you were not able to do the work, did not show eagerness or ability to learn new skills and show that you have the potential to grow more and more...."
Sudharani Eega said: "Congratulations Kavin Chandrasekaran"
Nadeem Akhlaq said: "Congratulations and keep it up. We all know and should know that life is not a cake walk. Also, there are no short cuts to succeed. Hard work is the key and since I believe in God so destiny plays a role in our success and that is where we note varied success with the same efforts by individuals. The good news is that our efforts and hard work does not go waste and we get its fruits sometimes, somewhere and someway. Good luck"
Pritam Tripathy said: "Congratulations"
See his post below:
Top Stories